A professional musician since 1980, Peter Baylor has played with countless bands in various styles in Melbourne and Sydney.With his eclectic guitar and vocal style he moves effortlessly from jazz and swing to blues, rockabilly and country styles . In recent years he’s toured Australia, the USA, Europe and Japan with a variety of groups including Doug Parkinson, The Dancehall Racketeers,Tom Baker, Mic Conways whoopee band,Blue Drag, George Washingmachine and Julie O'Hara,The Baylor Brothers plus many more. In addition to his musical talents, Peter played Scotty Moore in The 1994 Sydney production of "ELVIS, The Musical". He has supported Bob Dylan, Robert Plant, The Stray Cats, Tav Falco, Rosie Flores,Big Sandy and his flyrite boys, Mark O'Connor and Dan Crary over the years and more recently Mike Compton.

Jon Delaney began his performance career in 1994, and has gone on to perform all over Australia in his own bands and as a sideman with countless other acts. He graduated from the Victorian College of the Arts in 2005, and alongside his performance schedule, teaches guitar at a tertiary level. He spent 2008 playing in and around Berlin, and has also performed in the United Kingdom and Canada. In 2011 he travelled to Belgium to study with manouche legend Fapy Lafertin.
Double bassist Kain Borlase has worked with a number of artists and groups including The Ken Schroder Quartet, Mark Lockett Trio, Peter and Andy Baylor, Julie O’Hara, Alan Lee, Ted Vining and The Brunswick Blues Shooters. He has participated in numerous east coast tours and festival, television and live to air radio performances including the ABC TV’s ‘Art Nation’, The Queenscliffe Music Festival, The Gympie Music Muster and The Melbourne International Jazz Festival. 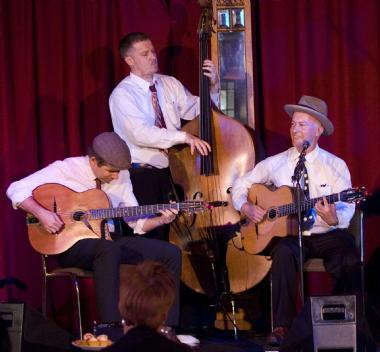