Waiting for Guinness hot wire the styles of Jazz, Punk, Mariachi, Folk, Tex-Mex and Westerns. Likened to artists such as Tom Waits, Calexico and the Pogues , Waiting For Guinness ignite the dance floor with their raucous brew of vaudevillian gangster jazz , spaghetti western, mariachi and irresistiblemelodies served up with a hot shot of adrenalin.

Variously described as Garage Cabaret, Gypsy Punk, and Gangster Jazz, Waiting for Guinness has been playing the Sydney pub/club scene for over 5 years. They may be one of the best dressed too. The band features up to 6 piece including: Banjo, Trumpet, Saxophone, Trombone, Accordion, Guitaron (Mexican Bass), Flute, Guitars and Drums. WFG are locals of Sydney from a diverse background that began life as a busking group and have since filled Australian venues such as The Basement, The Vanguard,

Waiting for Guinness are:

Garage-cabaret, Gypsy-punk, Gangster Jazz ! However you choose to describe the music of Waiting for Guinness one thing is certain: they deliver a formidable high energy live performance inspiring audience to dance within the first song! Waiting for Guinness are an original compositions band that fully engages the senses in a truly unique and original style. “BALKAN- WESTERN” It’s hard not to like Waiting for Guinness, the Sydney band that espouses a kind of balkan larrikinism….the band’s collective cheek is being considerably distended by its collective tongue…

The playing is never less than exuberant, from the raucous combination of trumpet, saxaphone, accordion, guitar, bass and drums. John Shand SMH 07 The bold, brassy swinging tone of WFG’s third album, which represents a new peak in their eclectic fusion and eccentric musing is set from the irrepressible opening track, ‘Cadaver Swing’. Tony Hillier Rhythms Aug 07 4 Stars This is a superb live band and I’m pleased to say the new CD captures all the excitement of their stage performance. T

he musicians, arrangements and production quality are first rate, and Friend and Foe will make sure the group remains at the forefront of global music in Australia. Jaslyn Hall Limelight June 2007 Think: Cat Empire team up with The Johnnys and go to Mexico on the Day of the Dead, drink lots of tequila and make some great folk music! I was left with visions of inebriated wedding guests dancing on tables while knocking back homemade European 80% proof firewater. Patrick Emery, Beat Magazine, Melbourne 08/09/04 About the closest thing I can compare them to is Tom Waits Phil Gribbs, Forte Magazine, Geelong 8/090/04 Waiting for Guinness combines highly charged eastern European lunacy with early jazz, German cabaret, jug band elements and often hilarious lyrics, John Shand, Sydney Morning Herald 18/10/03 ­ "they are obviously having a festival up there on stage and we can only beg to join them with a wild gesticulation called dance ¡­ Not pretty but zealously romantic." Miles Merrill, The Program 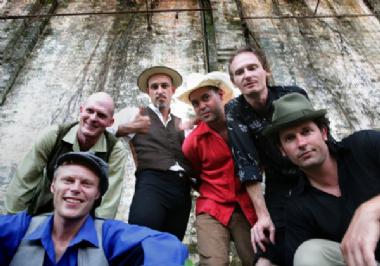