La Mezcla – A fusion of Latin Rythms La Mezcla is a Latin Fusion band with a unique quality. “La Mezcla” which means “The fusion” in Spanish, represents the diverse repertoire of the band, which consists of great popular Latin music styles such as Salsa, Cumbia, Son, Merengue, Latin R&B and Hip Hop.

La Mezcla was created in 1998, as a result of a personal journey in search of satisfying the artistic drives of the band members. In 1998 La Mezcla recorded a CD with original Spanish compositions; this CD was promoted overseas in Latin America. Some of these funky fused Latino style songs have been used in Australian Movies including ““Cat, Queen and Camel”, “Strange feet of passion”, “The Wedding” and “Black Rock”.

The high quality and professionalism of the band has enabled it to participate in many events and venues including the Moomba Festival, Johnston Street Hispanic Festival, World to World Festival, performances in the Concert Hall, Monash University, Rio’s Restaurant and Copacabana Latin Club. In 2004 the band La Mezcla decided to turn a over a new page and modify the style of their music with more well known commercial/pop Latin songs, aiming for a broader public in regards to age and background.

They have included in their repertoire many English & Spanish songs which are sung by well know Latin artists such as Shakira, Ricky Martin, Gloria Estefan, Buena Vista Social Club, Mark Anthony, Santana and many more. In 2006 the band has evolved, grown musically and is now better than ever. Come and see for yourself, enjoy the energy and the passion of Latin music at its best! 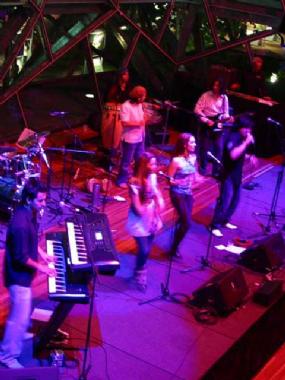