Mambises Premier Afro Latino Salsa Band provides a wide variety of rhythms and grooves that takes you to a journey through Colombia, Cuba, Puerto Rico, Dominican Republic and New York. With an emphasis on fun, which is entwined with the high energy of Latin music the audiences find themselves dancing the night away, with Mambises. Mambises music has been carefully selected for dancing, although, these musicians are well experienced, where they have performed in Theatres, Art Houses and Performing Arts Centres around the world. The driving force of the percussion section, the melodies created by the piano, bass, and the sensitivity of the brass section offers the band a special touch of harmony and identity. Mambises have been working extensively to create this unique salsa band; they have combined their ideas and goals, and are pouring all their musical experience into this project.

Originally from New Zealand,Julia has performed with popular groups such as The Hamish McClean Experience, a charismatic jazz quintet ;The Manawatu Jazz Club Big Band, Julia travelled to Cuba where she studied with Cuban dance instructors.

Mexican-born, Miguel, is a pianist brought up with Latin America traditions and with a passion for Cuban and Mexican music. He was from the early age exposed to influences of both Latin and classical Schools of piano playing, where he studied with some well illustrated names. He has been invited to perform in a series of concerts in Australia.

Justin is a bassist brought up in Northern New South Wales. He also has played with other Latin bands in Australia making him a respectable figure among bands, he has a feel for Cuban music almost unattainable for other bassist.

Nick is an exciting trombonist with a focus on jazz, improvised music, classic repertoire, he has experience in a variety of musical landscapes, he has played with many Brisbane’s artists and groups. He brings with him an interesting sound and approach to his instrument.

Tony has been playing trumpet professionally His career has spanned throughout Australia, he has played many musical styles such as Jazz, Latin, African, Funk and Blues. He has also played in major festivals throughout Australia with several other bands.

David has lived in Brisbane for more than ten years, before which he lived in Singapore, Italy and Spain, having grown up in the UK. He has been involved with big bands for many years and is currently leader of Brisbane Contemporary Jazz..

Rodrigo started music when he was 8 years old. He was inspired first by Folkloric music From Peru, Rodrigo brings the true essence of the latin American Voice to Mambises.

Steve is a Brisbane drummer,he has travelled the world playing percussion, now a distinguish Mambises member. 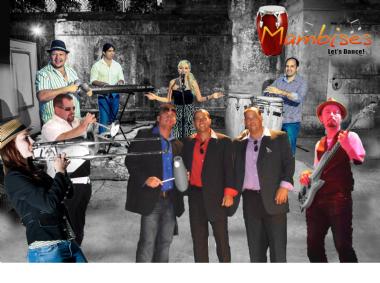