REVOLUCION is the driving force in Australia's salsa scene, delivering hot, vibrant, contagious rhythms that ‘make you wanna dance’. The band boasts some of Australia's top musicians and has toured extensively throughout Australia and internationally. Under the creative direction of lead singer, multi-instrumentalist and 2009 Latin Music Award winner JULIO MOLINA, this captivating group features an explosive brass section along with dynamic percussion arrangements. Take a mesmerising journey into the wild, warm and sensual culture of Latin America .......

JULIO MOLINA - Argentine born JULIO is a remarkable vocalist with an expressive, heart-felt style and also an accomplished instrumentalist. Julio has captivated many people all over the world with his versatility and multi-instrumental skills - and as a recording artist performing in places such as Mendoza, Buenos Aires, Rio, Mexico, LA, New York, Europe and NZ. He has featured with his band in the movie ‘AMONG DEAD MEN’ filmed in Queensland, Australia and he is an L.A.E.B.A. Latin Music Award Winner 2009, Sydney, AU.

JAMIE YOUNG - An extremely talented young Australian, JAMIE has been playing the trumpet for the last 12 years. During his 2nd tour of USA with the Brisbane All Star Youth Big Band he attended the International Association for Jazz Education Conference. Jamie comes from a very talented musical family. As a regular member of REVOLUCION for several years he studied Congas and Percussion with Julio Molina and Pablo Matus. Currently he is a member of REVOLUCION as trumpet, percussion player and vocalist and has recently had the experience of a cruise ship contract in USA.

BEN YOUNG - Australian born BEN began playing Trombone at a young age and studied music at Brisbane Conservatorium of Music. He also studied Timbales with Julio Molina and is now an accomplished Timbale player and vocalist. An extremely talented Jazz player with a passion for Latin music, Ben has for several years been a regular member of REVOLUCION and has recently returned from a 12 month cruise ship contract travelling around the Caribbean.

CARLOS MELO - Born in Colombia, CARLOS came to Australia back in the late 80’s. He moved from Sydney to Brisbane where he pursued what he describes as “the element for his soul”, playing our beautiful and exuberant Latin music. Carlos played for more than five years with Brisbane based bands such as Latin Connection and Sandungueros around major Brisbane venues, festivals and different community parties. Becoming a regular member of REVOLUCION is the best opportunity that could ever happen in Carlos’s musical life. 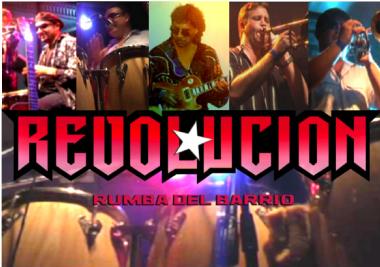