Request a Quote
THE Q CLUB
is a band based in Sydney, bringing together singer (and guitarist/percussionist) Adrian Mees, and some great musicians, leading you through a mixed jazz & brazilian repertoire with a funky touch.
Interpretations of great standards by composers like George & Ira Gershwin, Duke Ellington, Cole Porter, etc. alternate with work from famous brazilians Antonio Carlos Jobim, Joao Gilberto, but also more contemporary songwriters such as Djavan, Milton Nascimento, Caetano Veloso.
The repertoire of singer Adrian Mees covers a broad spectrum from hard-swinging scat-improvisations, via intimate ballads, to the warm sounds of the portuguese language, when he sings his brazilian material. The other musicians in the band are established names in the Australian music-scene in their own right, guaranteeing a time of quality musical entertainment.
The Q Club creates the atmosphere required for the occasion by mixing and matching up-tempo swing, ballads, bossa-nova, samba, mixing-up and freely interpreting these styles with a funky feel at times. Of course, the band will be most happy to consult about the repertoire to be played, for example if an emphasis in a specific direction is required.

THE BAND *):
Adrian Mees - voice, guitar, percussion
Michael Bartolomei - piano, keyboards
Jonathan Brown - double bass, electric bass
Laurence Pike - drums
Graham Jesse - saxophones, flute
Adrian Mees originates from The Netherlands. He left that country in 1989, to live and work in several Asian countries and Germany before making Australia home in 1999. He founded The Q Club in the year 2001. Adrian also sings a cappella with the quartet Sway (also listed in the EntertainOz directory), and also performs as a solo vocalist and guitarist, singing and playing jazz and Brazilian music, having been a regular performer solo and in a duo format with singer Rachel Hannan in, among other venues, The Hillcrest Coachman in Leura. In Germany, he performed with his own quartet in premier jazz venues such as Birdland and Dennis' Swing Club. He has played and sung in many combinations, and has been involved in various roles in many musical events, such as the North Sea Jazz Festival in The Hague. 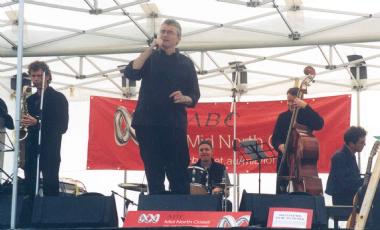