Yuval Ashkar is a composer, oud (’ud) player, percussionist and internationally-acclaimed Middle Eastern musician. His music is an inspiration to audiences, belly dancers and other musicians. Yuval is also a teacher of oud playing and Middle Eastern percussion.

With his band "Camoon", Yuval performs traditional Arabic, Turkish, Persian and Jewish songs and instrumental music. His style of playing is emotional and touching at times, getting the audience into an almost-meditative state, and exhuberant and energetic at other times, inspiring the belly dancers and the audience into a wild and passionate dance.

Yuval is the musical director and lead player in "Arabian Nights", a "dinner, show and party" extravaganza, where the audience is immersed in the full Middle Eastern experience, including food, drink, music, songs, dancing and even jamming with the band for eveyone's enjoyment.

Yuval has evolved his unique style of oud playing through the synthesis of Turkish, Iraqi, Egyptian and North African musical influences and techniques.

Yuval was born in Israel to an accomplished musical family. His father, from an Iraqi-Afghan background, was a master trumpet player and teacher who performed with Israeli orchestras all over the world. Yuval began his training with a famous Israeli oud player, Yair Dalal. He then broadened his studies by learning the Arabic style from Arabic oud master Gussan Harb, the Turkish style from Turkish oud virtuoso Mehmet Emin Bitmez and percussions from master Egyptian percussionist Hossam Ramzy.

In 2000, Yuval joined a flamenco guitarist and a saz (Turkish string instrument) player performing as an Andalusian ensemble. During the same year, he was part of a belly dance project with the group of Miri Alon.

In 2001, Yuval performed at “Metulla International Festival” with Ladino singer Yaheli Toren and famous jazz pianist Davis Coleman. In 2002, Yuval was invited to perform with Ladino singer Yasmin Levi in a special performance in Istanbul, Turkey. He also composed music for theatre and films, including a short film, which won the “European Short Film Festival”.

Since his arrival in Byron bay (Australia) in 2003, Yuval Ashkar has created music and projects with local artists and international musicians. He has performed several times at the Woodford Folk Festival with Guy Madigan and Ayelet Ashkar.

In 2003, Yuval recorded his first solo album, called “Maayan” - Traditional Middle Eastern tunes, songs in Hebrew from “The Song of Songs” and his own original compositions.

Yuval was invited to perform for the Brisbane Ethnic Music and Arts Centre (BEMAC) and other special events in NSW and QLD - 2005 Global Carnival at Bellingen, 2006 Spiegeltent in Brisbane during Multicultural Festival and Middle Eastern Festival. Yuval was also part of the successful music and dance camp “Bahar Bayram” as a teacher and performer. Yuval was the musical director and a performer in “Arabian Nights”, which became a tradition of Middle Eastern evenings with music and dance, gathering the best local and international musicians and combining instruments from eastern and western countries to create a magnificent fusion.

In 2007, Yuval Ashkar recorded his second album, called “Camoon“, with Guy Madigan and Cleis Pearce. In this album, Yuval created an atmosphere of traditional and contemporary music. Yuval has been invited to perform in the upcoming National Folk Festival in Canberra and has plans to go on a summer tour of New South Wales.

In Australia, Yuval has worked with a large range of musicians - Cleis Pearce, Greg Sheehan, Greg Lyons, The Romaniacs, Dursun, Akdash, Andy Busuttil, Kurdish Earth - and has had the honour of playing with oud master Christos Baltzidis at his 80th birthday. 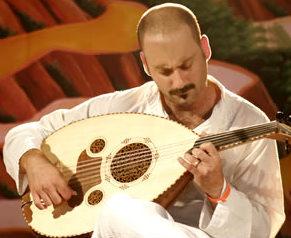