Zourouna is a Melbourne-based band specializing in Middle Eastern and Eastern European music. Their repertoire is uniquely entertaining with traditional and modern tunes from Turkey, Greece, Israel, Lebanon and Syria to name a few. Zourouna likes to take its listeners a cultural journey with non-existent borders. Zourouna is a popular choice for weddings, corporate events, family functions and all special occasions.

Zourouna is made up of three core members with the option of add on members if a larger performance is required. Main artists include:

Yuval Ashkar (Israel) on the oud (composer): A multi-instrumentalist who can play several other instruments including percussion. He is also an internationally acclaimed musician. Yuval is a known vocalist who has been part of several Melbourne and Byron Bay based bands over the past 10 years. He can sing in Arabic, Yemeni and Hebrew.

Byron Triandafyllidis on guitar and bouzouki: Byron, a very respected artist in the Greek music community, is also is a vocalist who can sing in Greek, Turkish and Arabic and also has a percussive flare. He has been a member of multiple Greek bands all over Melbourne and interstate. He has even performed overseas on several occasions.

George El-Azar plays percussion: a multi-instrumentalist who plays Darbuka, Cajon and several other frame drums. He has been in the industry for several years and accompanied several Middle Eastern, Turkish and Jewish Bands.

Zourouna has an extensive repertoire which varies across all the different countries mentioned above. Most of the tunes are traditional tunes that have been composed and perfected by the legends of this genre over the past century. Add on members option also available depending on the performance if required.

Repertoire List of Artists includes but is not limited to:

These are only to name a few of the artists' songs that we cover for most middle eastern tunes. Greek repertoire categories include Zeibekiko, Sirto, Kalamantiano, Hataspiko, and many others. Songs include: 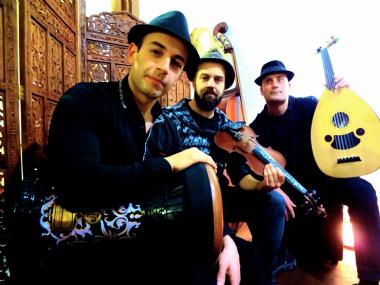