A.YA  ~Japanese Instruments & Taiko Explosion~: A.YA’s sound is a crossover between modern original compositions and traditional styles with unique Japanese instruments. They have performed at many festivals and events around Melbourne, and have also run workshops at primary and secondary schools in Victoria, NSW, and Queensland.

A.YA use a plethora of Japanese Instruments to produce an explosion of Taiko Drums , Flute , Sanshin, Exciting Vocals and more ; showcasing both Original and well loved Japanese tunes. Their high energy show appeals to young and old. With it's fast paced changeovers , multi instrumental content and audience participation ; A.YA is always a hit. A.YA was formed in 2013 by long term musical collaborators Ayako Tsunazawa and Ayako Fujii.

They regularly perform at many schools throughout Victoria and have performed at Japan Festival in 2013 and 2014, Melbourne Japanese Summer Festival in 2014, Japan Culture and Art Festival in 2013, at the 'Acoustica' performance series held at City Library in 2013, 'Floating World' Melbourne Music Week 2013. Corporate events have included performances at the Melbourne Star Observation Wheel and Crown Casino in 2014 as well as many more. They have also collaborated with artists such as Ann Norman (Shakuhachi player), Noriko Tadano (Shamisen Player), Showko (Ventriloquist Comedy Theatre) and Yumi Umiumare (Butoh Dancer). Personnel :

A Melbourne based multi instrumentalist from Osaka, Japan. She graduated Osaka College of Music in 1990 and began playing Japanese traditional instruments (Taiko drums and Shinobue Flute) in 1998. Ever since, she has been composing and arranging original music in this genre. Ayako has also been playing Sanshin (Okinawan Banjo) since 2010. She had the opportunity to take Taiko, Shinobue and Sanshin workshops in 2011, 2013 and 2014 whilst on tour in Japan. She currently teaches Shinobue in Melbourne. Ayako Fujii graduated a Diploma of Music from Monash University in 2014. 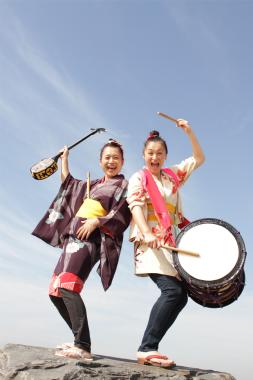