The Roseberys are a four piece band of collaborative song writers and engaging performers. Their song craft and unique upbeat sound is underpinned by carefully crafted arrangements and innovative musicianship. The Roseberys were one of the joint winners of the Brisbane ABC Exhumed band competition final in 2013. Their new self-titled EP was released in May 2014, and was the “Album of the Week” on Steve Austin’s morning program in the week commencing 9 June.  Their full album is currently being recorded for release later in the year.

The Roseberys music draws on a vast variety of musical tastes and backgrounds, ranging from alternative rock, rockabilly, folk, pop, blues and soul.  They intertwine these genres to create their unique upbeat sound. Based in Brisbane this four piece band formed two years ago and has held strong to the notion of collaborative song writing and engaging performance.

Vocal harmonies feature strongly in their music and each of the group fronts up to the microphone on occasion. The Roseberys are made up of John Esdaile (bass, vocals), Patrick Gibbs (guitar, vocals), Ben Mullen (lead guitar, vocals) and Peter Young (drums).

The Roseberys offer venues two full sets of original music, and can add to this two further sets of unexpected covers from bands such as The Saints, Stone Roses, Dandy Warhols, The Go Betweens, Neil Young and others.  The band bring high quality PA gear, and a cooperative and professional attitude. 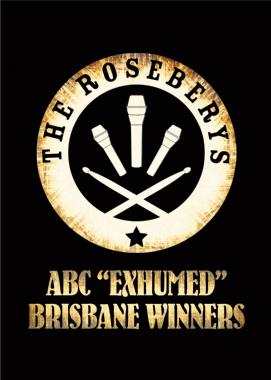