The Sign consists of Joey Dee, a true Tasmanian artist/singer/songwriter/actor and Pall, American guitarist/vocalist/engineer/producer. For ten years they have been consistently playing in Australia and recently toured Japan four times in 2009 and 2010 and are planning a tour of the United States to commence in March 2011. Constantly transcending,

The Sign uses 12 string and 6 string acoustic guitars to present a fresh original sound. Their exhilarating live shows always receive a great response either playing totally acoustic or with their recorded backing and video show. They have won awards from the Australian Songwriters Association, Billboard Song writing Contest and National Songwriters Contest as well as a place on Australia's "X-Factor" TV show. 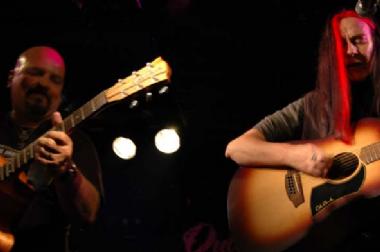