Request a Quote
Ok!! What do you get if you combine a vampire girl with a Martian girl, or a wolfgirl with an anorexic crocodile? Well, obviously the answer is either an elephant man or Kate Moss!!?? Obviously. These are just some of the song titles which seem to be inspired by Jeff Duffs warped perspective on life (and cheese sandwiches) and dragged out from the quagmire of Peter Northcote's demented mind. Along with Jeff and Peter, the rhythm section stars Pete Drummond, murdering the drum kit (bloody cruel to his action hero dolls too) and Campbell Hapi (the spunk of the band) slappin' the bass (and the Barbie dolls). Together they write the material for this hard hitting rock quartet.

It seems the Alien Sex Gods aren't at all interested in your regular run of the mill humanoid babes. And who can blame them. With the sort of girls the Aliens dream up, earth girls don't stand a chance.

This hard hitting glam rock quartet led by the screaming Cod-Piece (Jeff Duff) and Peter Northcote (the only living mortal capable of performing an Alien autopsy on his guitar) perform intergalactic melodies spiced with cheeky humour and pompous aggression. 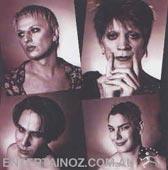