"Shake everything you’ve got" is the motto of Funk it Up, band that dives into immortal themes of Stevie Wonder, James Brown, Prince, Kool & The Gang, Michael Jackson and other groove masters, and makes a bridge to the new names in funk, hip-­?hop, disco and pop music such as Bruno Mars, Pharell Williams, Ceelo Green, Beyonce, Daft Punk, Meghan Trainor among other unforeseeable and irresistible things. After years working with companies such as Classic International Cruises and Portuscale Cruises as the drummer and band leader for The Cinnamon Band, Alessandro Devillart thought it was about time to “funk things up”, so at the beginning of 2015 Funk it Up was born. Together with Miguel Silva on bass, Julio Alves on keyboards, André Reis on guitar and the voice of Ana Tavares as the dame of funk, they have been conquering audiences in places such as Penha Longa Resort and The Lake Resort, The Thalassa Resort, Estoril and Troia Casinos, some of the most luxurious resorts and casinos from Portugal, as well as clubs and private parties. 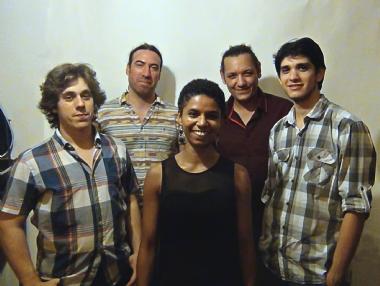