Request a Quote
Craic is an Irish work which simply means, fun. In a broader context, Having the Craic means enjoying good times in good company, with fine ales and lively music. This is what the Gunda Guys are all about. Formed in 1992, the band has played extensively around Melbourne and Victoria, including an appearance at the Port Fairy Folk Festival in March 1999

A Gunda Guys gig has always been a time to murder a pint or three, kick up the dust and have a Craic! 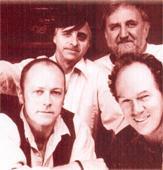