They combine traditional song writing with new innovative sounds, incorporating an array of styles into their music with influences ranging from Jimi Hendrix, and The Beatles, to The Red Hot Chili Peppers, and Sublime. Based in Marietta Georgia,Grahams Number got it's start with guitarist, Nick Sanders, teaming up with best friend, bass guitarist Andy Scherm. In July of 2009 drummer/songwriter, Brandon McKinney, was added on to complete the line up. The chemistry these young men have together bring back recollections of greats such as the Beatles, Led Zeppelin, and Rush. The band plays original and covers.

Graham's Number will perform on the Metromix Soundcheck on the 11Alive Morning News on April 22, 2011.

Tell us a little about the band. Graham's Number is a young musical band of three from Atlanta. We have a very revolutionary new and progressive style of rock and roll/blues/bluegrass/funk and reggae sound.  Our style is young, fresh, fun and upbeat, and our music appeals to all age groups.

At 15, Nick officially set his heart on playing music that made one think and feel a deep sense of awareness of one's soul and consciousness, a message of love, peace, and oneness of all mankind. He uses his heart and soul as his teacher to create music that is not bound by age, ethnicity, or culture.

Andy Scherm (bass guitar and vocals) was born in Atlanta on Sept. 20, 1989. Andy discovered his interest and love for music at the age of 11, and joined the orchestra playing the stand up bass. Three years later, Andy was introduced to the bass guitar. Some of his influences are Jimi Hendrix, Victor Wooten, Grateful Dead, Radiohead, Primus, Nirvana, Flea, and Vanilla Ice.
A spiritual message inspired Andy's input into this transfusion of soulful, raw, in-your-face music. He gets carried away by just picking up an instrument and playing. To Andy, music is very real and personal.

Brandon McKinney (drums, percussion, vocals) was born August 29, 1990 and raised in various areas around Atlanta. He started playing bass at age 5. Brandon got his first drum set at 7, and played drums in worship bands at age 11. Brandon has always been very curious and loves learning. He plays music because it gets him high, seeing music as a way to express passion, but also looks at it as a dangerous tool, because music is extremely manipulative and people's passions often aren't positive ones. His biggest influences are The Beatles, Smashing Pumpkins, Modest Mouse, a Perfect Circle.

When did you start playing together? Based in Marietta, Graham's Number got its start with guitarist Nick Sanders, teaming up with his best friend, bass guitarist Andy Scherm. In July 2009, drummer/songwriter, Brandon McKinney, was added on to complete the lineup.

Which metro Atlanta city do you live in now? Nick and Brandon live in Marietta. Andy lives in Smyrna.

What are you working on now? Graham's Number is currently in the recording studio working on our first release.  We hope to have it out soon.

For those not familiar with your band, how would you describe your sound? Graham's Number's music is revolutionary psychedelic rock and roll fused with reggae, blues and funk.

Graham's Number performs a mystical journey of rock, funk, soul and reggae with beautiful harmonies which are all rolled together to form the band's unique sound.

If you could tour with any band current or in the past, what band would it be? Primus

Where are you most likely to be spotted hanging out in Atlanta? The best music spots in town

Graham's Number is a finalist in Hard Rock's Battle of the Bands competition and they need your help to make it to the big stage to perform live at Hard Rock Calling 2011 in London's Hyde Park! They wowed music industry experts and knocked out the rest of Atlanta's competition and are now in the running with 40 bands from across the globe.

"GRAHAM'S NUMBER performs a mystical journey of Rock, Soul, Funk, and Reggae with beautiful harmonies which are all rolled togeherto form the band's UNIQUE sound." 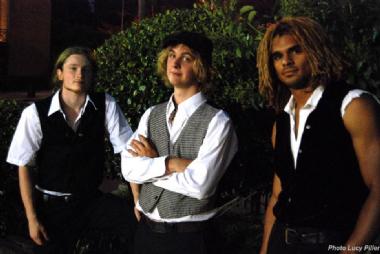