Moore Black Mmadike was born and raised in Nigeria where music and dance is a way of life. He began his music career in the mid 1980s, and upon arrival in Athens, Greece, in the early 1990s, he appeard night clubs as an MC. He also performed as a street musician (busking around Athens, Thesaloniki, Corinths, Patras, etc) before fronting 'Stir it Up', an 8 piece reggae band that played around Athens in the winter, and traveled other parts of the Greek mainland in the summer and throughout the islands to places like Santorini, paros, Mikonos, zakynthos, Crete, Samos, Pathmos, etc.. His music style covers Highlife, Afrobeat, Reggae, Calypso and Spoken Word On arrival to Australia in 1999 Moore Black he worked with various artiste, notably jazz musicians, before forming the Organic Roots in 2005. In 2003, one of his songs 'Dance mi ragga' made it to top ten on Music Oz award . With the release of 'Music is the Healing in 2007, his band was called to oppen up for Oliver Tuku, the Zimbabwean legendary musician during his toour of South Australia. Omne of the songs in the album 'Do you really love me? received massive airplay from Triple J (a nationally broadcast redio station). Moore Black & the Organic roots plays around Adelaide and inter-state. The band has also played frequently live at Radio Adelaide.

Moore Black and The Organic Roots played at my 60th on Saturday night. They were fantastic. Everyone loved them. Professional, great musicians, wonderful, warm and genuine. I highly recommend this 5 star trio.
Cheers
Gary   Sept 2019 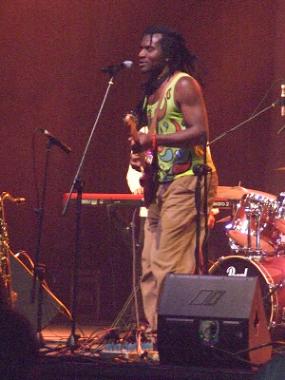