PULP FRICTION was formed in January 2006. Three of the members were part of a cover band that became very successful on the Sunshine Coast in 2005 and when the fourth member went his own way the guys decided the band was in need of a resurrection. Prior to 2005 Greg was a casual guitarist who had never played professionally and had never played bass.

The last year has seen Greg become an accomplished bass player and you’ll be impressed at just how skilled he is and how well he holds the rest of the band together. Chris made his mark in the karaoke scene on the Sunshine Coast. He is well known for being an extremely versatile vocalist with a great range.

Marcell came back to the music scene last year after a three year break and as drummer, provides the back bone for most of the songs they perform. He also does a kick-arse version of ACDC.

Gary is the final addition to PULP FRICTION and his skill on lead guitar will leave you in awe. Together the guys make a great team and the crowds thrive off the energy exerted when the band performs.

PULP FRICTION has only recently emerged from the workshop but each of their gigs so far has been a roaring success. The style of music they play caters to old and young alike and it’s a tough job to find a spot on the dance floor at their gigs. 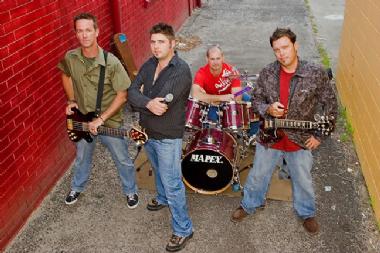