Formed in 2011 and based in Perth, Western Australia, The Retromen are a four piece band comprising of “youthful at heart” gentlemen who have significant musical experience playing pubs, clubs and corporate events dating back to the late 70's. Gordon (Guitars, Vocals), Harry (Vocals, Keys), Murray (Bass, Vocals) and Tim (Drums, Vocals) make up the band which has played more than 50 shows during the past 3 years at various pubs and functions around Perth and Country Western Australia.

The band can best be described as a Classic Rock cover band that plays material that is known across the generations that is still as relevant today as it was when it was first released. With many old classics still getting significant airplay and others enjoying "rebirth" through a re-release by another artist or through film soundtracks, the band has a wide range of material to consider for performance. Although being essentially a “cover band”, many of the songs we play we endeavour to add our own flavour whilst also being mindful of maintaining the essence of the originals. The boys play their music to have fun and this is reflected in their performance where the audience feels compelled to join in on the ride making the Retromen an ideal party band where letting your hair down by dancing and singing is high on the agenda for the event.

The band is influenced by "life defining" rock artists ranging from The Beatles, The Kinks and the Stones through to Bowie, Santana, AC/DC, The Angels and ZZ Top among others. Even The Monkees and rock renditions of Tom Jones and Nancy Sinatra party classics get a Guernsey at a Retromen show! You will now be getting the picture of what you will get with The Retromen. A fun show filled with memory lane classics performed with enthusiasm and professionalism providing the ideal back drop for a great party full of dancing and singing.

The band is more than comfortable getting into the “swing of things” by dressing for a themed occasion and perform a number "tribute" style shows focusing on artists such as The Beatles, David Bowie, ZZ Top and even Alice Cooper. These tribute shows are of course accompanied by the appropriate clothing (dress-ups - woo hoo!) but also involve a relevant video back drop, stage lighting and on occasion Go Go dancing girls (available on prior request). Of course the band is equally happy in a formal or “neutral” environment.

The band sees itself as a party band suitable for weddings, birthdays, club functions and pub/tavern venues with appeal to a wide age group starting with those in their 20’s right through to 60 year olds and above.

Although the band has a focus on fun, you can rest assured that The Retromen are professional, responsible and respectful of the needs and requirements of the host.

If singing and dancing away to classic rock tunes is your idea of a great event or party, The Retromen are for you!! 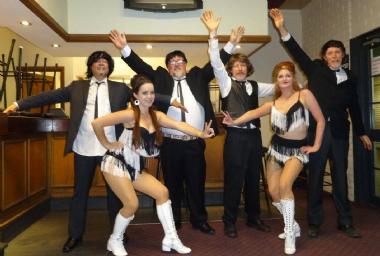