Don't Lock Up Your Granny Show

Dont Lock Up Your Granny 50s,60s,70s Rock n Roll show has been entertaining audiences right across Australiathe show is a 3 hour time capsule of the hits from some of the worlds greatest entertainers. Hits from legends such as The Shadows,Bobby Vee,Danny and the Juniors, ricky nelson just to name a few. The show is a costume change , with fabulous lighting. Dont lock up your granny show capsulates what was big in the days when poodle skirts and bodgies and widgees roamed the clubs. This is a show full of nostalgia it has Atmosphere and every Granny should see the show.

Doug is the front-man and lead singer of this very successful Brisbane band born in New Zealand Doug has performed at many national and international clubs around the world. Doug has released 2 Cd's over the past 12 years. Doug has performed with names like country music singer Michael O'Rourke, Michael "China" Walker currently still with JPY All-star band. China also played and did backup harmonies on Doug's second CD 'Honey' originally sung by US singer Bobby Goldsboro. Doug is a member of APRA, a membership exclusive to Australian Songwriters.

He is also from New Zealand. He notes as one of his inspirations, New Zealand Legend John Rowles. He performed with many bands during his time in NZ including Tony and the Initials Jim has been performing with Atmosphere since 2007. Jim is a professional member of the band and he just does what he knows best -BASS.

Steve is a professional musician and teacher of banjo and guitar, having thirty five years’ experience. He has played continuously along the mid north coast of Australia, with sixties Rock and Roll bands, such as 6 O’clock Rock ,and country rock artist Cash Backman, 70s and 80s cover band Airplay, and numerous other duo’s and bands. Steve’s guitar work certainly captivate his audience, displaying his true professionalism, and love of music.

Paul arrived from Sydney and immediately slotted into the Brisbane Scene. His drumming style and patterns suit the "Good Old Rock n Roll" that Atmosphere are well known for at there shows. Paul is the youngest member of the band, and has the flair and ability to drive the music with great rhythms and danceable beats.His presence completes the line-up, and gives Atmosphere the punch that brings the music alive. 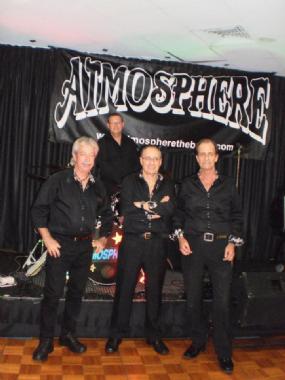