The bobKats are Brisbane's only International touring and Recordng Rockabilly / Roots / Alt Country Band.  Having performed at Greazefest.  Wintersun.  Beach Hop and other festivals.  The Kats really know how to engage and have fun with their audience.  Wether it is a private function or at a large festival, you will find The bobKats very approachable and a lot of fun.

The Kats have performed at:

Nelle on Double Bass
This girl slaps the bass as bad as she slaps her man.
Mastering the double bass was no easy feat for this Gal
but she has made it look easy.

Nell plays her bass in the traditional early style of Rock n Roll and Rockabilly
As Nelle say's  What is the point being like everyone else.  This Gal
is really different with her bullfiddle in tow come up and say Howdy at
A BobKats Show.

Chops
On the stand up drums and vocals.  Playing stand up allows Chops
to be right up front with the rest of the band, and get close to the audience...
Tim Devereaux
Tim Has supported notable acts like.
Stevie Ray Vaughan, with 4 sunnie awards to his name
Tim has a presence like no other. 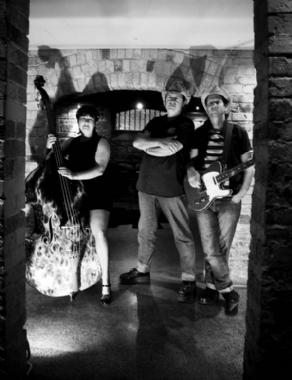