The Zips have won eight major awards over the last three years. The prestigious Mo Awards and the Australian Club Entertainers (ACE) Awards for “Best Production Show” and “Showgroup of the Year”.

The Zips are the Masters of Mirth and are on a high with their brilliant entertaining format that is blitzing audiences throughout Australia and Internationally. The ultimate party band for all occasions.

The Zips take no prisoners in their hilarious impressions of Tina Turner, Cher – resplendent in fishnet stockings, wig and tattoo and The Village People just to name a few of the 20 or so artists the group impersonate.

Not even Riverdance is safe from the hysterical lampooning on Michael Flately and the rest of the cast from the famous show. The Zips portray the routine with sheer precision…..nothing short of sensational. The Zips hurdle every barrier with outlandish costumes, makeup and huge repertoire to wreak havoc upon their showbiz luminaries.

The bands wide experience and repertoire enables them to read any type of music score and can back any type of act making it suitable for corporate functions, balls, Christmas parties and award nights. The Zips play a large selection of easy listening and jazz standards for early evening dinner music before they wind the crowd up with their sensational show.

With over 1,000 performances over the last seven years for major corporate clients including shows in Rio, Spain and Germany, The Zips are a band you can’t afford to overlook when booking your next function.

Don’t miss the opportunity to let The Zips take you on a Magical Musical Experience to relive some of the timeless classics that you have come to know and love. The Zips are without a doubt the Greatest Showgroup in Australia today. 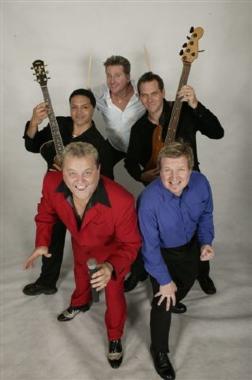