For an Australian Star for yoru next event as a Featured Artist.

For much of the early part of 2010, Darwin's favourite daughter, Jessica Mauboy, found herself at various time driving down Los Angeles's frenetic Sunset Boulevard, or standing amid the towering, neon-stamped buildings that engulf New York's Times Square, or enjoying the soul food and urban hip-hop sounds of Atlanta. She occasionally found herself in studios at 3am with imposing hip-hop producers, draped in bling, sipping Grey Goose, and puffing on Cuban cigars, taking phone calls from her dad back home, checking that she was okay.

Yes, it's surely a long way from the red dusts of the Northern Territory...

It was in America, home of her musical heroes (Mariah, Whitney, Michael) where Jessica discovered not only the sounds that would make up her second album GET EM GIRLS, but by and large, finding herself as well.

GET EM GIRLS is Jessica as she is - as she wants us to know her. "I wanted to give it all that I had." she says defiantly. "I really wanted to challenge myself to take a step up from the last album."

This is an album made for the dancefloor. It's the sound of an artist more comfortable in her own musical skin, one who's now ready to call her own musical shots. It's more sophisticated in sound and style, the lyrics certainly more worldly. Indeed, the shy girl who first appeared on Australian Idol as a 16 year old back in 2006 has grown - in more ways than one.

Sure, she'd known massive success at home (her debut album, BEEN WAITING, achieved double platinum sales, garnered seven ARIA award nominations and spawned six hit singles, plus in 2009 Jessica starred in her first feature film, Bran Nue Dae), but she wanted something more. America marked something of an independence, both musically and personally for the 21 year old. "I'd never been away from home for so long before - just dealing with being on my own, and being away from my family and from Australia was challenging."

The singer went into the studio with a definite musical mind-set. "I was feeling more confident and I knew where I wanted to go next. I just wanted to hit it," she says. "I wanted to go in there and spill out that passion I have for just singing out and screaming."

Armed with a couple of songs from home that she'd written with her best mate, producer Audius, she says she felt ready... except when the litany of superstar rappers, producers and iconic songwriters started rolling in to work with her.

Early on in Atlanta, Jessica had recorded 'Get 'Em Girls', a thumping hip-hop track (and the album's first single) with producer Bangladesh (Beyonce, Lil Wayne, Usher, M.I.A). When Jessica had left the track behind and returned to Los Angeles, she'd thought something "was missing". That missing ingredient was one of the world's most famous and iconic rappers, Snoop Dogg. The track found its way to the rapper, and he agreed to put his stamp on it. The missing link was found. "I never thought he'd even take the time to listen to it. I think that was the really cool thing - he found a connection with the song."

The rapper Ludacris did his thing on the Brian Kennedy-produced 'Saturday Night', surely a club favourite-in-waiting, with its sweeping synths and staccato beats. As a sign of Jessica's new-found confidence, she wasn't happy with the original rap, and had the rapper re-do it. He did.

Then there was 'Like This', a tune she'd written at home in Australia. "It's a special song to me," explains Jessica. "I didn't want anyone else to have it, and I really wanted it on the album. So we put it away and left it for a while." When Jessica did revisit the song once she was recording in the US, the general consensus was that it needed a little extra flavour. Enter Virgin Islands rapper, Iyaz. The star added his distinctive Caribbean lilt to proceedings, and the end result is that the track is one of the album's premier songs, with a chorus that will get in your head and a beat, mixed with a mood that will get you on the dancefloor.

On the sweeping ballad that is 'What Happened To Us?' (a track penned by the man responsible for Madonna's 'Like A Virgin', Billy Steinberg), UK superstar Jay Sean put his substantial vocal talents alongside Jessica's.

She found herself writing songs with Harvey Mason, Jr, known for his work with Aretha Franklin, Whitney Houston, Jennifer Hudson, Leona Lewis and Justin Timberlake among many others. The pair wrote two of the album's stand-out tracks, 'Fight For You' and 'Here for Me'.

Uber-songwriter Claude Kelly (Michael Jackson, Leona Lewis, Kelly Clarkson, Britney Spears) encouraged Jessica to be more open in her songwriting, more playful, more willing to take a risk. "Nothing that I suggested was stupid to him." Out of the session came the pumping sounds of 'Maze'.

Chuck Harmony (who penned 'Russian Roulette' for Rihanna) weighed in on the power ballad that is 'Scariest Part', which has hit written all over it.

She wrote alongside Stori James on 'Can Anybody Tell Me?' and with Cristyle, the woman who had written 'Touch My Body' for Jessica's idol Mariah Carey. For Jessica it was another moment, and the end result was 'Foreign'.

She found herself in the Atlanta studio of one Jazze Pha, the man responsible for shaping Ciara and one of the most respected producers in hip-hop. His methods of working proved a little more unconventional.

"He fell asleep while we were working. It was like meditation to him. I was like, 'Is he asleep?'" laughs Jessica, at the memory. "Then all of a sudden he woke up, started programming some beats to my lyrics and we had 'Handle It'."

With GET EM GIRLS, Jessica has grown. The production is first class, the sounds, thumping basslines and beats have a futuristic feel, and the vibe of an artist destined for bigger things outside of her own shores.

Jessica Mauboy has found her true sound, and worked with the best in the business who have been won over and amazed by her staggering talent and her soaring vocal range.
"I want everybody to hear this album," she says.

In the coming months, one suspects we will hear it; on radios, on television, and most definitely, on dancefloors across the globe. 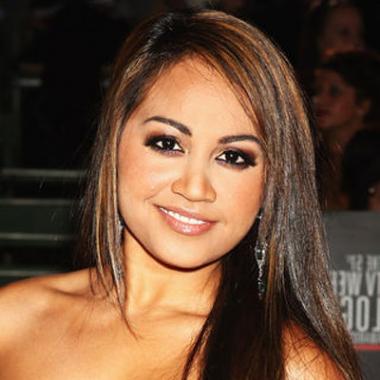