Request a Quote
One of the few classical flautists in the world with the ability to cross over successfully into jazz and pop, and described by the Sydney Morning Herald as “Australia’s only classical pop star”, all her albums have entered the FM pop charts.

Miss Rutter studied flute at the Sydney Conservatorium of Music where she graduated with merit.  She was then awarded a French government scholarship and spent three years studying with Alain Marion and Jean-Pierre in Paris.

Miss Rutter was appointed lecturer at the Sydney Conservatorium of Music. A true disciple of Alain Marion, she became known for her dynamic and communicative performing and teaching skills. She toured extensively for Musica Viva. For several years, Miss Rutter was leader of the eclectic chamber group Posh.

Since 1990, Miss Rutter has been a household name in Australia, appearing on every major television show including a 60 Minutes feature.  At the 1992 Edinburgh Festival, she performed her smash hit one-woman show, Tutti Flutti. She was a television presenter on Channel Nine’s Getaway in 1994.  In 1995, Miss Rutter performed in Europe and recorded a single with acclaimed American pianist Suzanne Ciani.  She won rave reviews in the role of Titania in the Karnak Playhouse production of A Midsummer Night’s Dream, for which she wrote the incidental music.

In 1996, Miss Rutter received critical acclaim as a composer with her album, blo, collaborating with Oscar nominee, David Hirschfelder.  She released her fifth smash hit classical album, Romancing the Flute, in late 1998.  One of her most recent concerts was a sellout at the Sydney Opera House Concert Hall.

Forthcoming projects include a ballet score, a new album with conductor, Richard Bonynge and a recording of the Vivaldi Flute Concerti played on baroque flute at modern pitch.  In August 1999 Miss Rutter played in an international tribute concert to Alain Marion at the National Flute Convention in Atlanta, USA.  She recently recorded a flute concerto, written for her by Guy Noble for ABC Classic FM broadcast.   Other engagements include a pop version recording of Silent Night for the Salvation Army ‘Spirit of Christmas’ pop album.  Miss Rutter is writing new material for a limited edition CD recording of Pan as part of her endorsement of Brookland Valley’s Verse 1 wines.

Other recent appearances include those with Michael Crawford and the West Australian Symphony Orchestra at Leeuwin Estate, and Symphony Under the Stars with the Tasmanian Symphony Orchestra.  Recently she appeared as a special guest of the International Flute Festival in Brazil.  Miss Rutter followed this with performances in Argentina and Chile.

In 2001, Jane Rutter will appear as soloist with the West Australian Symphony Orchestra at Leeuwin Estate and in Perth and Melbourne performances of Mozart at Twilight.  She will tour extensively with guitarist Greg Pikler for Musica Viva Australia and with vocalist Angela Toohey in the new cabaret spectacular Broadway Babes.

September will see an appearance with trumpeter James Morrison and his band at the historic property of Mangowine in Nungarin, Western Australia.

“To work with Jane Rutter has been pure joy.  She plays like a great opera singer.

Her innate musicality and incredible energy inspired us all”             Richard Bonynge

“Rutter is technically brilliant.  She brings to her instrument a feel, an emotion,  almost an i 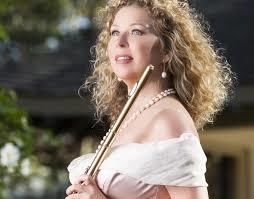