Mangrovejack (Wayne Graham) has been in the music industry since the early age of seven. There have been a lot of eras in his life that has had many influences on his writing like,

Mangrovejack first performed at the age of seven and hasn't there been some water under the bridge since then.

Learning the guitar at the age of 12 enhanced his abilities together with that of what his grandmother taught him on the harmonica. His father Johnny (Jack) Graham used to entertain at The Playroom along side Johnny O Keefe and The Escorts and various hotels along the Queensland coastline.

Most gigs Wayne would be sitting and studying right at the bands feet. Being heard by staff on board a trip from Brisbane to Mt Isa. Wayne was offered to play for the Queensland Rail System on the Sunlander trips from Brisbane to Cairns for our overseas visitors. His renditions of particularly John Williamson songs captured hearts of visitors from many locations and countries.

These days Mangrovejack is quite happy to play to audiences along any coastline or country pub leaving his clients with the taste of the salt air from his songs. His Islands and Yacht clubs, beaches and bars is what inspires him to do what he does best and most of all the great people along the way have been extremely supportive. Mangrovejack is one entertainer that certainly has the gift of "music with bite" and can adapt his voice to sound very close to the original artist. So what you hear is pretty much easy listening quality sounds from a very passionate artist. 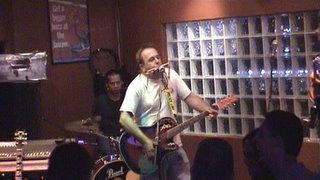