NFH are experienced musicians with unique vocal harmonies who just love to play the blues, soul and rock and roll. The band has played at weddings, parties and anything that requires a groove. John has been singing and playing music since he was 4 years old. John plays rhythm acoustic guitar but will jump on the bass and percussion throughout a gig just to mix it up. His lead vocals cover a range of styles from the crooning of Frank Sinatra to the dulcet tones of Al Green and Elvis. With all live performances,

John is keen to encourage audience participation and fun. John's influences are from the 50's and 60's. For John live music is about engaging an audience so that they leave a gig happier than when they first came in. Dean has been playing bass guitar for many years. He has played in many bands over the years and is happiest when working with the dynamics of a live band context. His musical influences are taken from blues, soul and rock and roll. Dean musical style reflects his personality. That is, when he's feeling 'hot' , his music playing is even hotter. Dean believes that his playing should always leave an audience leaving a gig happy.

Clay has been playing music since he can remember.He has developed very different tastes in music from from Country to Soul to R&B.He plays acoustic/electric guitar, drums,keyboard and percussion. He has played most of his material in Open Mic sessions over the last 4 years and enjoyed every minute of it. He has also been involved in many cover bands in the last 10 years and played gigs at various venues in Sydney. Clay's lead and vocal harmonies add a richness and tone unique to NFH.

Daryl has been an accomplished singer, saxophonist and percussionist for many years. Daryl is a natural musician whose greatest asset is his ability to improvise. His musical influences are jazz, blues, soul, and rock and roll. For Daryl, music is the rhythm of his life. When performing and entertaining, Daryl is happiest. For Daryl, his audience must leave a gig happy. NFH perform a wide range of tunes from the Blues Brothers to the hits of the 50's and 60's. If you're looking for fun, great music and a walk down memory lane , then No Frills Honey (NFH) will take you there. 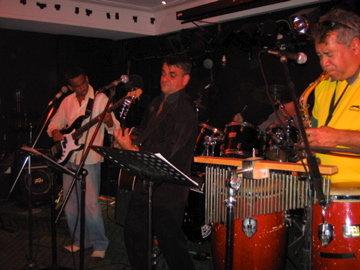