A Tribute To Jimi Hendrix

'A Tribute To Jimi Hendrix', is a live performance three- piece ensemble dedicated to to the music of The Jimi Hendrix Experience and Band of Gypsys. From their vintage attire and outrageous choreography to their authentic period backline, this trio faithfully recreates the sounds, sights and feel of a Jimi Hendrix concert.

A truly professional and World class tribute to the greatest guitarist of all time. You won't believe your eyes, or your ears. Pound for pound, this is as good as it gets. Carl Ray Blake (as Jimi Hendrix) brings not only solid technique, ruffled shirts and high heeled boots, but also the moves that made the late legendary guitarist both an innovative musician and a memorable performer as well. Using a backline of vintage Marshall amplifiers and the trademark upside down Fender Stratocaster and Gibson Flying Vee, the left hander tears through the Hendrix repertoire with astonishing accuracy. The rhythm section of B.C. Dolsen (as Mitch Mitchall) on drums and Hunter Blake (as Noel Redding) on bass are second to none. From B.C's stick juggling and stirring fills, to Hunter's hurtling bass riffs and restless stage antics, they are an ovation provoking team that win the crowd night after night. The band's action packed 90-120 minute set includes all of your Hendrix favorites and smash hits, such as Purple Haze, Fire and Foxy Lady, all played note for note. 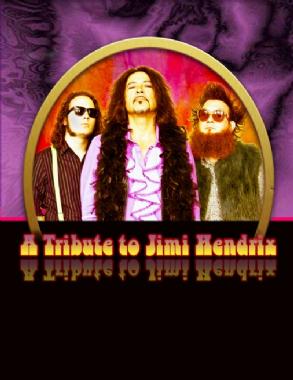