The Australian Beatles are undoubtably the No.1 Beatles Tribute Band in Australia.  A Beatles experience like no other. Featuring a left handed ‘Paul’ with authentic costuming and instruments, and now exclusively available with a full video backdrop.

The Australian Beatles superbly reproduce, in precise detail, the evolving sights and sounds of the greatest band in history.   From the early days of mop top hair and matching suits, to the astonishing psychedelic horizons of ‘Sgt Pepper’ and beyond.

The Australian Beatles tribute will transport you back to the golden age of rock ‘n roll, and show you why The Beatles are the biggest selling, most influential and most important band in the history of popular music.

Exclusive to the Australian Beatles – A Full Video Backdrop.  Theatre and corporate show are now available with a full video backdrop, taking audiences back in time with the sights ‘Swinging Sixties’.  Including backdrops of The Cavern Club, Ed Sulivan USA TV appearances, Abbey Road, Apple Corp Rooftop performance and of course, lots of pics of screaming fans!  This video really sets the scene with the flavour of Beatlemania.

One Band = Nine Tribute Shows! - The World's Most Versatile Tribute Show! The show can also be booked at no extra cost as part of the All Star Showstoppers tribute evening with the same cast of musicians performing tribute shows to The Blues Brothers, The Rolling Stones, The OzRock Show, The RockShow, Cliff Richard, David Bowie, Frank Sinatra and the unique All Star Supergroup finale.

Live sound and vision from montage 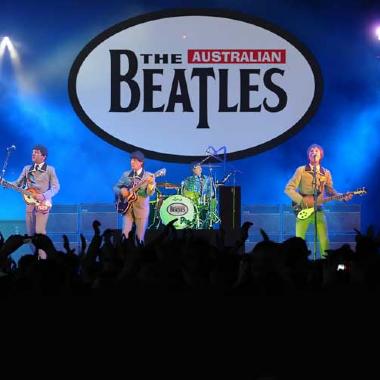