‘It’s 106 miles to Chicago, we gotta full tank of gas, half a pack of cigarettes, it's dark, and we're wearing sunglasses’.

The Blues Brothers are back in town! You'll be ‘Shakin' your Tail Feather’ when Jake &amp; Ellwood Blues hit the stage backed by live musicians with their all singing, all dancing revue of Blues Brothers. Pete DeVita (Jake) and Scott Vance (Ellwood), front this internationally established action packed tribute to the brothers of blues. The show includes all the classic hit songs from the Blues Brothers movie as well as whips, handcuffs, and of course, plenty of dark sunglasses!
Australia's premier Blues Brothers Review Tribute Show has packed dance floors across Australia & Asia with this interactive performance, featuring a live band.
This exciting show is also available with an additional full brass section - creating a dynamic eight piece band, perfect for national and international Blues Festivals. It's also worth noting the Blues Brothers show can also be booked with our R'n'B Rolling Stones tribute band for no additional cost as it encompases the same musicians!
One Band = Nine Tribute Shows! - The World's Most Versatile Tribute Show!
The show can also be booked, at no extra cost, as part of the All Star Showstoppers tribute evening with the same cast of five musicians performing tribute shows to; The Beatles, The Rolling Stones, The OzRock Show, The RockShow, Cliff Richard, David Bowie, Frank Sinatra and the unique All Star Supergroup finale. 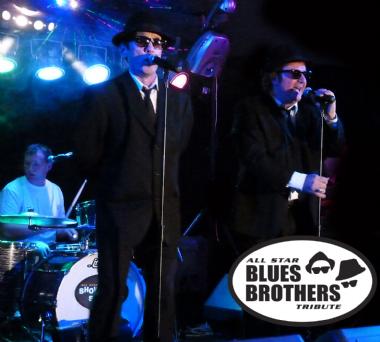