The Worlds No.1 Tribute show to MISS BRITNEY SPEARS... Charlotte Hopley impersonates the one and only POP Princess Britney Spears.

Charlotte has been around the world with her tribute to Britney, and continues to put on the most accurate show you will ever see!! If you want to book the best Britney Show... Look Here ?

The audience will not be disappointed when Charlotte performs all of Britney's biggest songs, which include Baby One More Time, Toxic, Womanizer, Oops I Did It Again, just to name a few! Britney is the ultimate pop star! With her numerous number one hits, and her name constantly making breaking news in the media, its no wonder she is such a success!

Charlotte has perfected Britney off to a fine art. Down to every dance move, every song, and every costume she wears has been made to ensure it's like watching the real deal! It has to be seen to be believed. When Charlotte enters the stage in the ringleader outfit, from her 'Circus' tour, then changes into the red cat suit from her 'Oops I Did It Again' tour, the reaction from the crowd is just unforgettable, and such a wonderful experience to be a part of. Without a doubt Charlotte captivates her audience from the minute she starts singing, to the end of her fantastic show.

The show is designed, so that the audience can either watch, or dance the night away to their favourite hit songs. It can also be adapted to any length of time up to an hour long, and is suitable for any type of venue, or age group. It also comes with professional sound engineer and P.A equipment. 2 x dancers are also available for the show if requested. 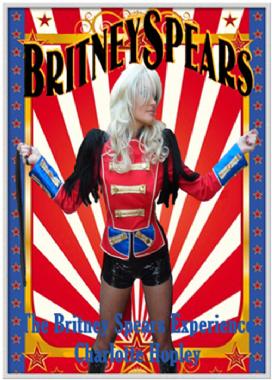