COLDDAY - a tribute to Coldplay

Coldday was formed in 2012 as the result of joining the talent and passion of 4 musicians to create a great, honest and faithful tribute to Coldplay music, the band formed by Chris Martin, Jonny Buckland, Guy Berryman and Will Champion. It's definitely a band created by coldplayers for coldplayers. Coldday is based in Barcelona and has been touring their shows all around bringing on stage all the magic of the British band and the atmosphere and energy of their live performances.

A stunning show that pays attention to every little detail so that the audience feels like in a real Coldplay show. In every show of Coldday you'll enjoy the greatest songs and anthems of the British band, from their very first album “Parachutes” to their last “A head full of dreams”. The band has a very complete setlist formed by more than 40 songs. ...

Based in Barcelona (Catalonia – Spain), Coldday started their career in 2012. Since then they have been touring the whole country from coast to coast, playing in the main cities: Barcelona, Madrid, Valencia, Zaragoza, La Coruña, Bilbao, Girona, Tarragona, Santander, Vigo, Palma de Mallorca, etc. They have also played in several countries such as Belgium, Luxemburg, Nederland, France, Germany, England, Romania, Andorra, Portugal.

The band has played in all different kind of venues and situations. They play for private & corporate events and also in large venues like stadiums, theaters, auditoriums, etc. Lately they have been taking part in different music festivals all around. 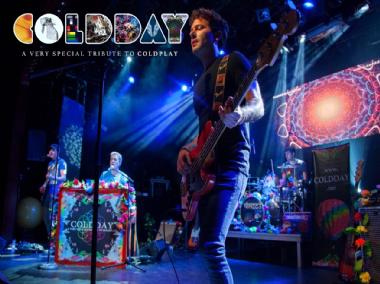