Introducing dynamic new stage show – DYLANesque – the Bob Dylan Story. Jeff Jenkins, lead singer, opens the show with the tale of how a young 19 yr old Bob Dylan hitch-hiked his way from Duluth Minnesota to New York City with a guitar and just $10 in his pocket - and went on to become one of the world’s most successful songwriters of all time.

Starting from his humble beginnings busking in cafes, ‘DYLANesque - The Bob Dylan Story’ is a 2-hour narrated rock show that leads you through the songs and events that shaped Dylan; his relationships and breakups, religious conversions, the dramatic scenes when Bob ‘went electric’ at Newport Folk Festival in 1965, how he went from playing solo to playing with The Band, through all his incarnations including the much loved Travelling Wilbury's. This Bob Dylan tribute is a theatre piece that takes you on a moving and powerful musical journey. Jenkins performs with an electrifying 4 piece band giving incredible performances of all the Dylan favourites including ‘Blowin in the Wind’, ‘Lay Lady Lay’, ‘Tangled up in Blue’, ‘Rolling Stone’, ‘Hurricane’, ‘All Along the Watchtower’ and many more - this is a show not to be missed!

“I saw Bob Dylan in concert but I prefer the DYLANesque version” Phil Kafcaloudes, ABC radio

“Fantastic…and that’s from someone who knows the words - and intonations - of every single Dylan song!” Jill Fraser, TV Producer 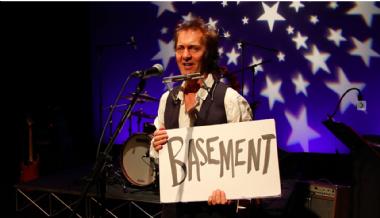