Request a Quote
Let Me Introduce To You...

When Marcus Cahill takes to the stage he performs full of pure devotion and admiration for his idol John Lennon. Marcus brings to life the experience of listening to and watching John Lennon perform live again. Marcus re-creates breath-takingly, musically spectacular live renditions of all the timeless albums recorded by The Beatles and John Lennon
.

Julia Baird: John Lennon's sister (Jun 12, 2004)
"I heard Marcus singing what I can only describe as John songs, songs that John wrote, sang and loved. He sounds
uncannily like my brother John."

Marcus Cahill become known to devoted Beatles and John Lennon fans around the world fondly as "The King of The Cavern".

Bill Heckle: Owner of The Cavern Club, Liverpool (Sep 01, 2009)
"Marcus is definitely capable of performing as John in a world class tribute band for sure. I would hope that one day he ends up in Las Vegas or Broadway in a big Beatle theatre show or something like that. He certainly is good enough and he would deserve it." 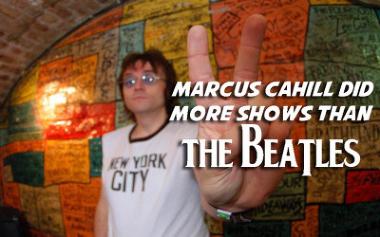