Close your eyes or keep them open, you’ll feel like you’re experiencing the real thing! With a five-piece band and stunning audio and visual production, “Just A Girl” provides a 55-minute set of high-energy entertainment.

On stage, Clare Lappin becomes Gwen Stefani.  Whether she’s rocking out to the anthemic 90’s hit ‘Just A Girl’ or pouring her heart out in ‘Don’t Speak’, Clare captures the punk-rock supergirl’s essence to perfection, engaging and captivating the crowd at every show.

“Just A Girl” began rehearsing in 2006 and, in no time, was performing at venues around Melbourne including Rock For Kids, a charity event for The Starlight Foundation and more recently at Fox Studios for Foxtel's Christmas party.

The band covers old-school No Doubt songs such as “Sunday Morning” and “Platinum Blonde”, more recent hits including “It's My Life” and “Hella Good”, and even a sample from Gwen Stefani's renowned solo career such as “What You Waiting For”. 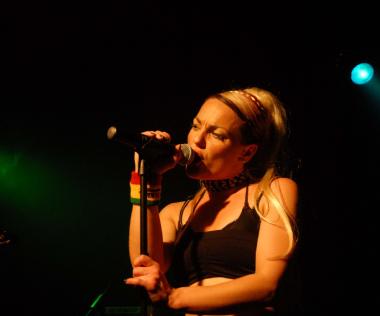