The idea of bringing together the sounds of some of the classic West Coast American Rock Bands was brought into being by a group of friends whose musical careers have been interlinked for over three decades. With four strong vocal harmony voices, duelling lead guitars, classic keyboards, and a solid rhythm section of Bass, Drums, and Percussion, the band is easily considered one of the best in their genre. They handle the challenging task of reproducing the sounds of these popular bands with consummate professionalism, and relative ease.

This band is blessed with the vocal power of Murray Thomas. His soaring and swooping vocals allow this band to sing anything and be able to cut it live!!

He has previously played in the Santana Project, Janski Noise and 2112, and has written some world class original tunes. Coupled with his mischievous sense of humour and mindless optimism the live shows are always entertaining.

Luke is not only part of the powerful vocal ensemble within the band, but forms the second part of the "duelling banjos" with Steve Bedford. The Donald Fagen quality of Luke's voice along with his lead guitar solos are a highlight of the show.

Having had the privilege of playing and singing with some of Australia’s finest musicians over the years, Luke has also supported world class acts such as The Pointer Sisters and Mondo Rock. He always has a ball whenever the “Brothers” unite.

From his early days in bands of the calibre of the Kerrie Miles Band, the Chris Lloyds Band {ex Big Red}, and Mixt Lollies, Greg spent lots of time in the mid eighties touring and supporting such well known acts as the Pointer Sisters, Mondo Rock, Dragon, the Choirboys, and the Party Boys.

In the late 90`s and to the here and now he has been recording and co-producing albums culminating in the “Swallowing Suns” album for the band Janski Noise and the "One More Shot" album for the country rock / blues band – "The Rain" released in March 2010.

Shayne has been playing guitar for 30 years and played extensively in the Brisbane scene.

He has many years experience as a guitar teacher, and learns and performs the challenging solos of these great bands with relative ease.

Michael has joined the band this year, and brings with him many years experience in the Brisbane and international scenes.

He is very much a "feel" player, and is the foundation of the band's "groove"!

Greg started playing guitar with his first band "The Young Ones" appearing regularly on Channel 9. His first international support act was with legendary rock band “Bad Company? in 1975 at Festival Hall Brisbane. He switched to bass in the "Funk Era" and is a fine exponent of “slap bass” which adds an excellent musical sophistication to the LSB sound. He has played in high quality bands “The Kerrie Miles Band", “Freestyle", and has also gigged with Peter Moscos, Ewan McKenzie, The Silver Studs (circa 1985), and more recently with “Radio Saigon" and “The Danny Mayers Band".

His studio work includes recording with, amongst others, Kirk Lorange and Michael Fix, in 2000.

With several decades experience each, these 6 professional musicians will ensure that the entire performance will leave you breathless! Not to be missed! 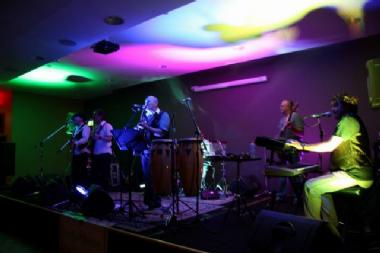