This spectacular Cabaret was many months in the making and has proven to be one of Australia's most exciting Stage Shows.

Mark Bowden, Australia's answer to Barry Manilow, has devoted himself to perfecting the fine voice of this internationally renowned singer and songwriter

During the two hour performance, Mark is supported by the 'Manilow Magic Orchestra', eight of the entertainment industries  finest musicians.

Further enhancing the Extravaganza are the beautiful and talented Di Heaton Dancers who with their feathers and sequins, bring a touch of Las Vegas to every performance."

Mark Bowden has been performing on the Australian Club circuit for the past 15 years.

His new Show, 'Manilow Magic', has been many months in the making, and without a doubt, a show that has been well worth waiting for.

Barry Manilow is famous worldwide for his big hits such as, 'Mandy', 'Copacabana', 'Cant Smile Without You', and not forgetting his theme song, 'I Write The Songs'.

Throughout this two hour Show, Mark takes you on an emotional roller coaster ride, performing songs about life, romance and heartbreak, but also involving the audience in a bit of fun as well.

The beautiful and talented Di Heaton Dancers will entertain you with their high energy dance routines, and captivate you with their brightly feathered and sequinned costumes.

Mark Bowden, Australia's answer to Barry Manilow, with his master showmanship, will make this Extravaganza something you would expect to see only in Las Vegas. 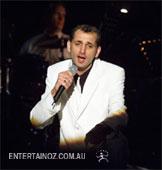