Almost Slayed are a SLADE tribute band that combine great costumes with an uncannily authentic sound to take you back to the days when Slade were the most successful British band of the early '70s Glam Rock era. Their attention to detail and faithful reproduction of Slade’s many hits will have you believing you are watching the original Slade in all their former glory. Almost Slayed are all 1st class experienced musicians. Lead vocalist Danny Devlin sounds eerily like Noddy Holder from Slade, and when he lets fly with great stomping hits such as Get Down and Get With It, Mama Weer All Crazee Now, Cum On Feel The Noize and Gudbuy T’Jane you will not believe your ears. Almost Slayed, the only Slade tribute band in Australia, are accurate both in looks and sound, a fact reflected by the many positive and encouraging comments left by fans all over the world on their website and youtube clips, many of whom have repeatedly requested Almost Slayed to tour the UK and Europe as well as the Eastern States. When The Sweet, toured Australia in 2012, Almost Slayed were the opening act when they played at The Regal Theatre. They went down exceptionally well receiving a standing ovation from the crowd who were calling for an encore from the band. Original guitarist from The Sweet, Andy Scott, and fellow band members complemented Almost Slayed very highly. Lead singer Danny had the opportunity to join Slade in 2013 but due to circumstances could not commit, I’m sure that is the greatest compliment you could possibly get. 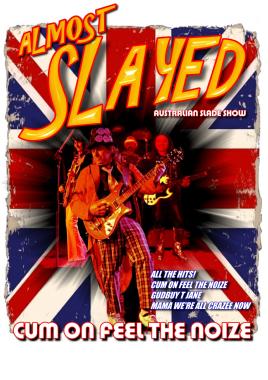