The BEATLEZ Tribute Show (formerly called the Melbeats), is one of the most internationally acclaimed Beatles Tribute acts currently performing in Australia.

The BEATLEZ are the ideal entertainment for corporate events, parties, festivals, clubs or private functions and will lend an air of festivity and fun to any occasion - a splendid time is guaranteed for all!

Re-live all of the hits from the early Beatlemania days including: Please Please Me, A Hard Days Night, Help, Nowhere Man, etc.

The second half of our show sees the Beatlez embark upon a magical, fun-filled trip back to the sixties wearing their bright and colourful Sergeant Peppers costumes.

Why Choose The Australian Beatlez?

It's the special care and attention to detail that goes into replicating the exact look and sound of the Fab Four and their live performances.

Scott has been a Beatles fan all his life. He started playing guitar at the age of 11 by learning many of The Beatles classic songs. Scott makes the perfect John Lennon and plays all the same guitars as Lennon played in The Beatles. These include the famous black Rickenbacker 325V64, the Gibson J160E acoustic and of course the Sunburst Epiphone Casino, both in its original and post "Revolution" natural form. Naturally, a collection such as this can only be done justice when played through an AC30 VOX guitar amp on a chrome stand to create that classic Beatles sound!

Ben was literally brought up on The Beatles from an early age and has spent significant time in and around the local Melbourne live music scene, working with professional bands from an early age. Ben has spent countless hours and has a strong dedication to the incredible bass lines and replicating McCartney's amazing vocals was a challenge he welcomed. Ben handles the McCartney role whilst playing that unmistakable 1962 model Hofner violin 'Beatle Bass' and Rickenbacker 4001 through a VOX AC100 bass amp.

Michael as a true master musician has enjoyed taking on the challenge of mastering all the George solos. He started listening to the Beatles music from an early age through his dad’s record collection. Michael started playing guitar at the age of 12, learning many of the classics such as Day Tripper and Lady Madonna. He graduated from Melba Conservatorium of Music/Victoria University completing a Bachelor of Music. Michael has also played in a variety of musical productions. He currently teaches music at Kangan Batman TAFE and also teaches guitar privately. In true George form, Michael plays his extensive collection of Beatles Guitars through a Vox AC-30 on a chrome stand.

Dan, as the newest member of the band has shown great dedication to recreating the authentic Ringo drum feel. Dan comes to the Beatlez with a wide range of experience in the professional music scene. Dan has previously toured with a wide range of cover and original bands throughout Australia, and also performs with top Melbourne original rock band Robot Child. As well as being an accomplished Musician, Dan teaches Performing Arts. Dan plays a Vintage Ludwig drum kit, fitted with Beatlez drop "T" logo number 1! 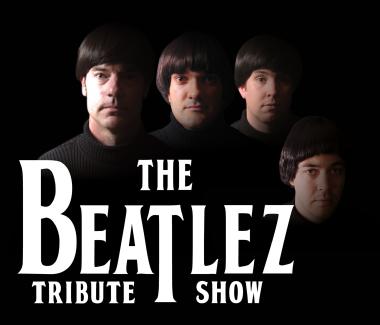