Australian’s Tribute to Suzi Q “The Wild One” Featuring Brandi and the Badcats. Excitement, passion, and commitment that is The Australian Suzi Quatro show. Brandi was always a Suzi Q Fan, even taking up bass because of Suzi and choosing to buy a white Fender Precision Bass because it was featured on the Quatro album. Brandi has followed in her footsteps ever since. With guitarist Reno, formed Brandi and the Badcats in 2002 to play the music that influenced Suzi. Playing Rock ‘n’ Roll, Rhythm and Blues and Rockabilly from the fifties, songs by artists such as :

On the dance circuit in Melbourne they soon developed a reputation for hard edged Rock ’n’ Roll as it was in the fifties. With Brandi's powerful voice and energetic bass playing people began to wonder whether Brandi could 'do Suzi' and it wasn't long before they began requesting Suzi Quatro songs.

The first Suzi Quatro Show was a thirty minute set at the Ararat Jailhouse Rock Festival in 2005 and it brought the house down. Now the Australian Suzi Quatro show is 1.5 hrs of pure Suzi with all her hits, Wild One, Devil Gate Drive, Rock Hard, Daytona Demon, Can the Can, to name just a few. Brandi plays Suzi with all her heart and soul and the effect on the audience is something that has to be seen to be believed. But just as Suzi has never forgotten her roots (she hosts a roots music radio show on BBC2 every Sunday) Brandi does not forget hers.

The Australian Suzi Quatro show opens with Brandi and the Badcats doing their own support, 45 minutes of Rock ‘n’ Roll ,Rockabilly and Rhythm and Blues with Brandi on electric bass and double bass belting out their cool cat dancing music. After a short interval, the band returns with Brandi in leathers and the guys all in black for 90 mins non-stop Suzi! The show has been acclaimed as the Best Suzi Q Tribute show in Australia.

Suzi Q Programme The Wild One Rock Hard Mama's Boy Too Big Stumblin' In 48 Crash I dont do gentle Glycerine Queen Tear Me Apart Move It Catsize All Shook Up Heartbreak Hotel Evie She's in Love with You Daytona Demon Can the Can Devil Gate Drive Since the Show has been put together in late 2005 in Brisbane it has been playing in major venues such as Kedron Wavell RSL Redcliffe Leauges Club Bribie Is.RSl Pine Rivers Bowls Club etc.. 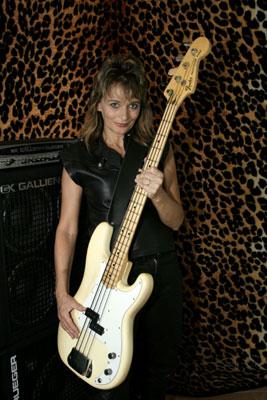