Combo Bombo is a versatile, sophisticated jazz ensemble. The members are talented, young, vibrant musicians who are passionate about performing. They are willing to meet the needs of their clients and are flexible and dynamic in order to accommodate requirements, with the group ranging in size from 3 to 5 performers, with or without vocals. Our combined performance experience leads to a professional and highly entertaining event.

BIOGRAPHIES
Vincent Bradley – Vocals/Trumpet/Flugelhorn/Harmonica
Vincent has had extensive and varied experience as a performer. Beginning as an 11 year old at pubs on harmonica, his appearances include:
Vincent is versatile and above all else loves to create Music (with a capital 'M'). Playing trumpet, flugel horn, tenor horn, french horn, trombone and harmonica as well as his vocal talents, he likes to keep his finger in many pies. Having performed for years in A grade Footscray Yarraville City Brass Band and Melbourne University Orchestra, it's not uncommon to find Vincent at venues like the Queensland Performing Arts Centre with Mexican Mariarchi band Los Romanticos or improvising hard funk grooves with Melbourne hammond combo Blue Herring.
As a vocalist, Vincent did a minor practical study in classical voice and has performed in groups ranging from choirs to musical theatre, singing solos accompanied by symphonic wind bands to accompanying solo singer songwriters. Most of his vocal acrobatics however are deployed while fronting 12-piece party band Mr Toad’s Wild Ride at pubs, corporate functions and street festivals. He has also appeared on The Denise Drysdale Show with the Channel 9 band and with his own high school Blues Band Instant Blues. with the Channel 9 band and with his own high school Blues Band .
He recently completed an international tour to China with the Australian Youth Band performing on Trombone (and occasionally didgeridoo). Highlights included performances on the Great Wall of China and for the International Olympic Committee and moonlighting at Beijing jazz clubs. He also plays with the talented and well known Australian folk pop artist Liz Frencham at music festivals across Australia and is featured in her latest albumn You and Me singing a duet they performed long ago at a Combo Bombo gig Baby It's Cold Outside.
Vincent graduated with a Bachelor of Music and Diploma of Education from Melbourne University and by day is a mild man 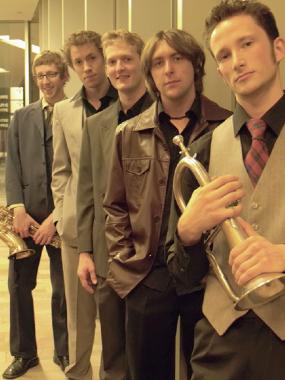