THE TEENAGERS have a wealth of local, national live and touring experience being members of some of Melbourne’s most successful working bands. We are a functional little 3 piece, super professional, flexible and most importantly, affordable!

A real feature for us is that we have 3 lead vocalists and amazing harmonies. We play everything 100% live, so no need for backing tracks or machines etc and our play list is certified #1 hits from the 60’s through to 90’s. All great classic hits and no fillers designed to get people on the dance floor having a great time.

We play everything from pubs & local venues, events or private functions, corporate entertainment and festivals.

We know what to play, when to play it and just how to get your event jumping.

We have a Facebook page you could check out where you will find many live videos and loads of interaction with our followers.

Here are some ‘real’ testimonials from recent gigs and events.

MCG LONG ROOM: " Our guests had a fabulous evening; an amazing success and we thoroughly enjoyed every song. Totally professional".

MOONEE VALLEY RACECOURSE: " The band were terrific to work with and a huge success. Everyone absolutely had a ball. They are so entertaining and talented!"

ANZ Bank “Totally professional and so entertaining, they were awesome!” Highly recommend The Teenagers.

HEALVILLE SANCTURY “We were thrilled to have The Teenagers perform for our 2019 Xmas party, they were the best act we’ve ever had. The best mix of songs too!

LIFE'S A BALL EVENTS: " Best music we've ever had at our events, members feedback is excellent and they want you back."

THE ACORN “We love The Teenagers, they always get a great crowd and they are so talented! We have other bands come to check them out!”

THE GRAND HOTEL HEALESVILLE “Great band, very entertaining, they sound just like the record and they can all sing!”

THE TERMINUS HOTEL HEALSVILLE “One of the best bands we have had at The Terminus, they are terrific.”

CRACKED PEPPER FRANKSTON RSL “One of our favourite bands, The Teenagers are superb!”

TRIPLE F ROCK’N’ROLL CLUB “The Teenagers can play anything. We first saw them at a local venue and were so impressed we asked if they could play a whole night of traditional Rock’n’Roll, of course they could and they were great!”

KNOX CLUB: "Our first event in 15 years where everyone danced all night. You guys sound amazing and we can’t wait to get you back"

WATSONIA RSL “The Teenagers were great, smooth and slick, they had the crowd from the very start.”

MORDY HQ: " Absolutely amazing singing and harmonies. You sound like the original bands. You guys are also A LOT of fun, hilarious!

THE PEARL OAKLEIGH’ “The Teenagers are 3 very talented musicians and singers, everyone could not stop talking about how great they were. They put on a great show, Super talented!!”

CLUB KILSYTH’ ‘The Teenagers are fantastic, as soon as they start to play you know they are pro’s, brilliant musicians! Their mix of songs is perfect for all ages, totally reliable and the crowd love them!’

RINGWOOD RSL’ ‘The boys are so good, all the locals love them and they are so entertaining. Everyone in the band is a star! The locals even have nick names for them! It’s always a highlight when The Teenagers are playing.’

THE SANDS HOTEL ‘The Teenagers are a great act, great selection of songs and they really get the crowd going.

MENTONE RSL’ ‘What a great afternoon, The Teenagers are just fantastic, they sound as good as the original acts. People danced from the first set all the way till the end.’

BENTLEIGH RSL’ You know a great band within the first few minutes and that’s exactly what we got with The Teenagers.

EAST MALVERN RSL’ The Teenagers have played at the East Malvern RSL on a few occasions and are one of the standout bands we have booked. They are most professional and very talented musicians and we will book the band again,

BEAUMAURIS MOTOR YACHT CLUB’ ‘The band was terrific! What a great selection of material, they had something for everyone. Very impressive indeed, they are as good as any international band.’

FIREFLY EVENTS’ ‘We were recommended The Teenagers and could not be more impressed. There are a lot of bands out they, but not many that sound like The Teenagers.’

THE GREAT PROVIDER – ST KILDA “ So professional and easy to work with, great music and terrific skill. Slick!

MARY- PRIVATE EVENT: "Guys, we couldn't have asked for a more fantastic band. You all were awesome. Danced all night and everyone had a fabulous time thanks to your music."

KATHLEEN- PRIVATE EVENT: "How fortunate was l to have this fantastic band at my recent birthday. They just brought the place alive with their skilful playing and song choices. Thank you very much. Go see them folks, you will have the best night.

ONYX BAR: ".. Fantastic songs, great musicianship, you guys can really sing. The best band we have had in the venue!"

WHEELERS HILL HOTEL: ".. WOW!,….Sounds just like the records" You guys are really good!

BEACHES OF MORNINGTON: ".. One of Melbourne's best covers bands"

TOKAR ESTATE – YARRA VALLEY Absolutely brilliant, we have had The Teenagers back multiple times and they always sound outstanding. Great selection of songs and super easy to work with. Simply one of Melbourne’s best bands.

MICAWBER TAVERN:” So professional and so slick, these guys are amazing musicians and great blokes too, everyone always has a fantastic night!

WOORI YALLOCK FOOTBALL CLUB;” – The Teenagers are awesome! They absolutely brought the house down with their great music and live entertainment. They were just so professional. Everyone loved the band, definitely having them back!

SANDOWN PARK HOTEL; - The Teenagers are fantastic. They literally play everything and sound amazing, their skill will blow you away. One of our favourite bands!

KEW GOLF CLUB:” – We have had the Teenagers multiple times and they are just fabulous. No matter what type of event they seem to always know what to play and they sound superb!

ROSEBANK NORTH – RESTAURANT-WEDDINGS-EVENTS;” – The guys were just awesome and everyone danced all night! Everyone loves the song selection and we re-booked straight away!

IVANHOE HOTEL; - The Teenagers are real pro’s, the crowd here doesn’t normally get up and dance but ‘The Teenagers’ got them up out of their chairs and everyone had a great time. One of the best bands we have had!

MAROONDAH SPORTS CLUB ‘-  We had terrific feedback and everyone were really impressed. We will definitely have you back again! 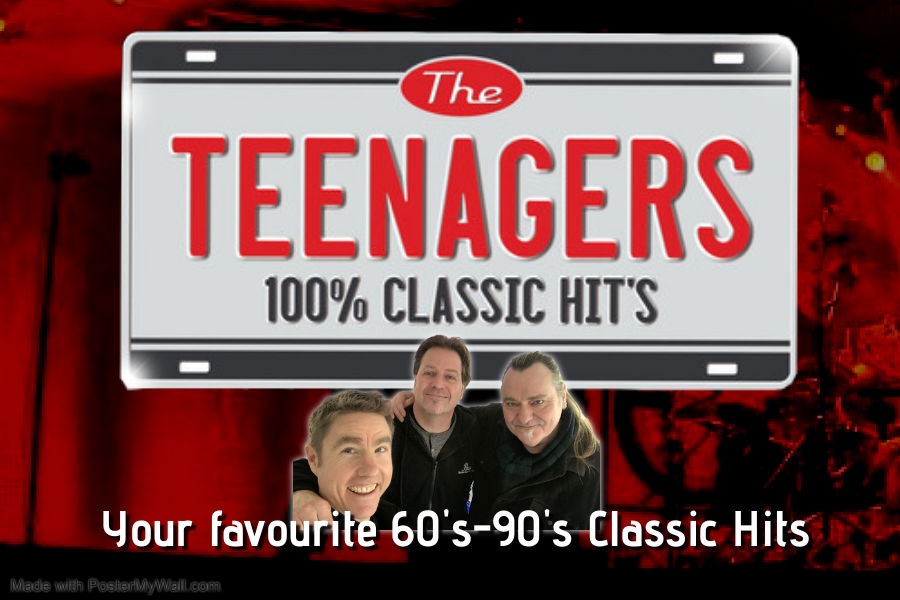