Jadida evokes the atmosphere of the bazaars of Cairo and India and combines it with the pulse of the West, quite unlike anything you have heard or seen before. The melancholic cry of the oud and saxophone along with exquisitely evocative vocals, will transport you from silent dreams of sifting sand to the frenzied passion of driving dance music.

Jadida was formed nearly 10 years ago by a group of musicians who felt the need to express their diverse musical tastes and experiences in a fresh, new format that paid homage to the myriad cultures of the global music scene. Their exquisite musicianship coupled with an energetic stage presence makes them a group not to be missed. 'Jadida does what world leaders have failed to do - build bridges instead of borders that humans battle over.

These classically trained musicians have brought together the sounds of our continents to create uplifting, inspirational music. Their music is addictive' Harb Gill (Arts editor, Herald Sun, Melbourne) Of Jadida's second album, Systa BB of Planetary Chaos PBS FM says... “From their opening track “Phoenix” to the closing notes Jadida are gripped by a sense of urgency, and while the album may allude to some kind of out of control experience, they know exactly what they’re doing, and more, why they’re doing it. Middle Eastern tunes meet rap, Latin sounds greet African scales and jazz is thrown into the mix and the result is some kind of alchemy, brewed against the backdrop of the vibrant Melbourne music scene. This album could only have come from Melbourne. The sense of community, political outrage and sheer musical and vocal talent shine through with a beat to wake up dance floors and blast home speakers alike. This is not fusion…. This album is a musical statement.” Jadida can perform as a duo, trio, quartet or with the full band. Jadida can also perform with their bellydancer who alongside their singer, combine a visual feast of belly delights with crowd stirring dance moves.

Here is a sample list of songs that Jadida performs: 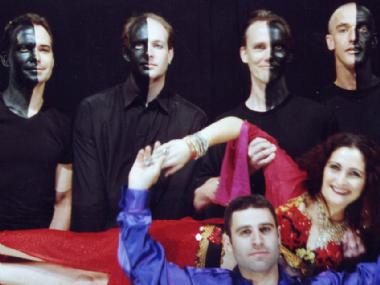