James is guaranteed a place in Melbourne sporting legend due to his dramatic late appearance as a substitute in the February 07 A-League semi Final in front of 47,000 screaming fans at Telstra Dome. His last-minute headed goal, securing Melbourne Victory it's first A-League Grand Final place produced scenes of near delerium. Now he can add an A-League Premiership medal to his collection

James is 24 years old and from England. He is a true professional and is an inspiration and role model to young soccer fans everywhere he goes. His fun, friendly personality lights up any event, especially for younger fans. James started his professional career with historic English Championship side Crewe Alexandra.

James spent 13 and a half years at Crewe from the age of 9 until 22, under the watchful eye of renowned coach Dario Gradi. He was part of the team which won promotion from League 1 to The Championship. James was also Reserve Team Captain at Crewe for 2 seasons. After spells at Altrincham and in Iceland,

James saw the potential in Australian football and came to the VPL's Richmond Eagles in March 2006, where he was no less than a sensation - scoring 13 goals in 18 appearences and taking Richmond from the relegation zone to the play offs. Testemonials: "James attended a number of of events at our club and he was a massive hit with the young players. James is a true role model and is always keen to engage on a personal level with young fans and junior players. They were talking about him for weeks afterwards - Junior Coach Brighton Soccer Club. James is available for autograph signings, photo opportunities with fans and event/store openings. 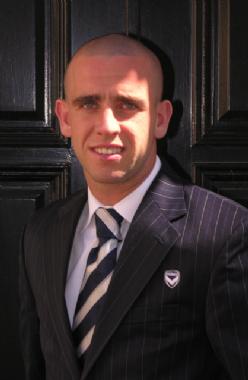