Having started her career as the roving reporter on Agro's Cartoon Connection many years ago, Holly Brisley is today one of 's most well known and loved entertainers. Her career has been diverse and has comprised many interesting projects, including both acting and presenting roles. With her role as Amanda Vale on the hit series Home and Away behind her, Holly’s career looks set to take a new and exciting direction!

Born in Adelaide in January 1978, Holly is the eldest of two daughters of property developer parents. When Holly was 18-months-old the family moved to Queensland 's Gold Coast where the change of lifestyle had a lifelong impact on her. She hasn't lived more than 10km from the beach ever since.

At 16 years of age Holly landed a three-year role on Seven's Brisbane-based children's program, Agro's Cartoon Connection. She started the job in her final year of secondary school and completed her schooling while working on the show. In its final year, Holly moved with the program to Sydney .

"Moving to Sydney as a 18-year-old was an enormous step for me," says Holly, "but I was lucky enough to do it with a full-time job and the family-like support of the production."

When the final show of Agro wrapped in 1997, Holly claims that year was her 'first big reality check'. Having been gainfully employed for three years she was alone in a big city with tough competition for jobs.

But Holly's enthusiasm and positive attitude served her well as she landed a presenting role on the Prime Regional Network's lifestyle/travel show, It's About Time, and maintained her acting with a myriad of guest roles, including an episode on Home and Away.

From 1999 to 2001, Holly presented a country music program on cable television and secured roles in Scooby Doo: The Movie (she played the video woman, a “vital clue”), and Garage Days which was directed by Alex Proyas (I: Robot).

In early 2002 Holly returned to Brisbane with great plans of redirecting her career, but the opportunity to host the Nine Network's Looney Tunes cartoon show was too good to refuse. Again she found herself on a plane commuting to and from Sydney for six months before moving back to the harbour city.

In 2003 Holly landed the lead role in the Australian feature-film, The Crop (which premiered in August 2004), for which she won 'Best Actress' at the New York Independent Film Festival in May 2005. She also played Heather Locklear's role of Sammy Jo in the Hallmark Channel's Behind the Scenes of Dynasty. 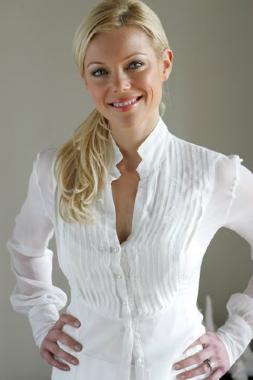