Originally from Sweden, JTR (John, Tom, Robin) are three very talented brothers based in Brisbane Australia. Growing up in a musical family with instruments everywhere, and with both mother and stepfather already successful in the music industry, it was inevitable that the brother trio would set their sights on becoming artists.  Their parents had an inspirational influence on JTR, with producing and songwriting a daily occurrence.

Spending time around the studio from a young age gave JTR a natural creative environment to develop their own songwriting live performing and production skills. Individually they would work away at penning songs and producing them. They also went to music school performing on stages and playing in bands.

It was only in their late teens that they thought of doing something together. Once the brothers formed JTR there was no stopping them. They went on to write their debut album produced by world famous production team Trinity. They did show after show in Sweden and the USA and soon attracted attention from Industry giant David Sonenberg (Fergie, Black Eyed Peas, John Legend). David saw great potential in the boys and signed them to a management deal.

With their slick brotherly harmonies and blazing guitar licks they took on Australian Xfactor. After 9 live show TV performances, JTR navigated there way to the TOP 7 of Xfactor 2013 becoming a household name in Australia. JTR are the full package.

They look great, they sing amazing and are world class musicians.

Have them at your next event. So Book Now! 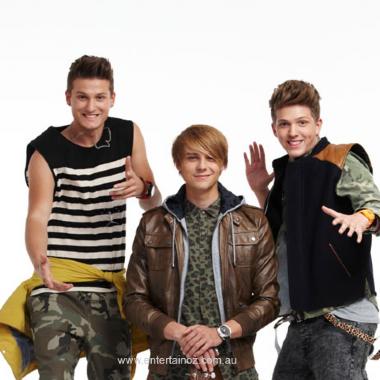