National TV Presenter and Media Personality. Melissa’s passion for gardening led her to complete a horticultural degree at Burnley Dux of her class. Moving into radio her naturally engaging personality was spotted early and she was channeled into television presenting.

After 4 years on the ABC’s prestigious ‘Gardening Australia’ alongside Peter Cundall, she hosted the gardening segment on “Melbourne Weekender” with Jo Bailey, before staring as one of the main host’s of the established TV hit series “The Garden Gurus” . Currently airing nationally on Channel 9 at 5:00pm every Saturday, the show has seen her travel all over the world to places such as Korea, New Zealand, Singapore, Canada. Her popularity and reputation has made her highly sought after.She has attracted a range of opportunities including large flower and garden festivals around Australia and overseas including MIFGS and Chelsea to name a few.

Melissa's public speaking skills have seen her host a range of events including the Telstra Golden Plate Awards The Hairdressing & Industry Association Gala Chaity Dinner with personalities such as Peter Hitchener and recently the “Guys and Dolls Media Launch”. She has also lectured at some of Australia’s most prominent universities.

Recently, she has been called the 'ambassador' of the Baw Baw festival in Gippsland and has a loyal following in this region. Melissa’s flair for writing has seen her release her first book entitled “Garden Feast” focusing on the delights of cooking and growing your own heirloom vegetables and cooking them with the help of recipes from the infamous 'Heronswood' Kitchen . It has received a great reaction from budding gardeners and well respected industry colleagues and has recently been nominated for the prestigious “Le Cordon Bleu” world food media award to be held in October 2007.

Previous and on going credits include articles for, Burkes Backyard, Gardening Australia, The Age, The Australian Gardener and much more.

Bookings Melissa's ability to capture and excite an audience has lead her down many other avenues other than simply just the garden path. She is a polished and highly professional presenter both on tv and off with a quick wit creating a very likable persona.

For this reason many companies are seeking her services purely to host their particular event. With a wide range of experience she has hosted events such as The Gold Plate Awards, The Deaf/Blind Association Gala with Peter Hitchener, Hair Beauty and Industry Association Gala Charity Dinner to of course major gardening events such as The Melbourne Flower and Garden show, The Cairns Tropical Garden Show and 100's of other Garden events and shows all around the country where she has also given in depth talks and lectures.

Melissa's on screen experience as a tv presenter has seen her services being used in corporate and in-house videos and for various other Ch9 appearances. Melissa is currently available for bookings. 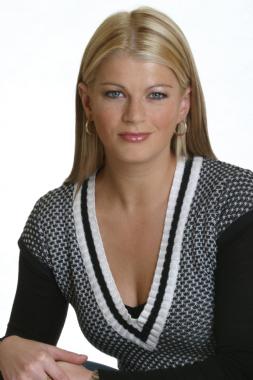