I've been doing German Wheel now for about 9 years. I first started off doing wheel as a gymnastics sport. After a few years I enrolled in the WA Circus School and started performing in numerous productions. I have now trained and performed internationally in numerous shows and productions.

The most recent show I've performed in is “La Gara” (The Race). This show was based in the United Arab Emirates for car company, Ferrari. I was in a cast of twelve and performed a double synchronised wheel act with Balasz Foldvary from Hungry. I was also involved in pitching and basing for acrobatics and dance. I performed 6 days a week and did 768 shows in 7 months. The show was organised through Oddpost Entertainment UK and Underwraps Choreography Uk.

Prior to this I toured with Silvers Circus throughout Western Australia. This was a traditional travelling circus and tent work was required. I performed with Silvers for 8 months and did and average of 190 shows. As well as performing the wheel act I assisted with stage and lighting builds and any backstage requirements for other acts.

The Burswood Casino Event was a festival type Gala hosted by a company for it's South East Asian corporate clientele. The other performers from Bizircus and I collaborated together and created a one off show for this event. Clips of this event are in the promotional video. 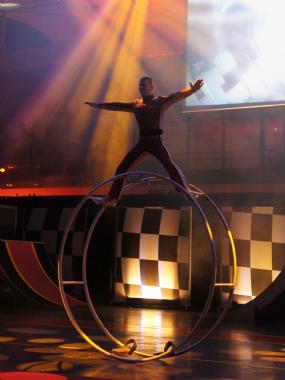