Amazing African acrobatics for all occasions I am proud to present the death defying, gravity defeating, energetic, colourful and always cheeky ZimboyZ!

To liven up your next function and add that additional bit of spice, include an appearance by the ZimboyZ.

They have performed at a number of large and small scale events including the Royal Adelaide Show, Sydney’s Royal Easter show and the 2004 national tour of Circus Quirkus to name a few. They “were the stars of Conrad Jupiter Casino’s stage spectacular” in ‘The Hidden Palace’ on the Gold Coast, QLD.

Each performance can be specifically tailored to your event and budget.

Audiences immediately warm to the cheeky humour of these flexible, muscly and ever smiling characters. For riotous fits of laughter, breath taking gasps and a feel god time include the ZimboyZ at your next function.

So you want to know more about the ZimboyZ……….

I would be delighted to tell you more about our troupe and our antics.

Some potos been attached  to vew


TAILORING PERFORMANCES TO YOUR SPECIFIC NEED

CIRCUS QUIRKUS
ZimboyZ was invited to join this touring circus in 2004. Our brief was to create 4 short entertaining performances.

Troupe performances - On a large stage safely distanced from the audience we were able to include all of our daring and death defying acts with
traditional, rhythmic music and coloured lighting.

Group performances - During these we integrated additional performers from the circus into our routines creating a seamlessly smooth performance with
a multitude of performers.

In contrast to the quieter circus acts, the ZimboyZ created performances that got the crowd onto their feet clapping and cheering. The troupe proved to be a
crowd favourite.


on a smaller stage the act was adjusted to select routines best suited to the environment. The audience was filled with many families and young children, so
colourful and boisterous routines were used to maintain everyone’s attention. Much audience interaction was used including teaching people how to
juggle.

JUPITORS CASINO
During these performances ZimboyZ were given reigns to create performances from our wildest dreams. These included our most daring and frightening balancing acts, fire hoops and intricate juggling. These performances were created specifically to wow large audiences.

SMALLER FUNCTIONS
ZimboyZ are able to create performances for smaller functions. Although smaller in size, they are not smaller in entertainment quality. 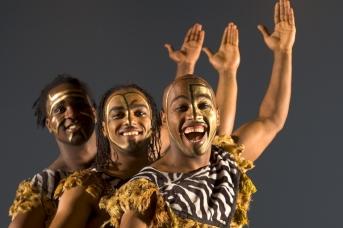