Cirque Songstress Christine Ibrahim is cemented in the firmament of cabaret as a true force to be reckoned with on stage.

A performer with an arsenal of abilities from lead vocalist to Aerialist (notably both at the same time) Pianist, Composer and MC, Christine is one of the most versatile and sought after leading ladies of the Australian Cabaret scene.

With The Age Melbourne referring to her compositions as “inspired” and Sydney Sentinel celebrating her “extraordinary vocals in various styles” Christine Ibrahim is in possession of an arsenal of abilities ranging from Composition, powerhouse vocals, piano and aerial acrobatics the Cirque Songstress is a force to be reckoned.

Cirque Songstress, Christine Ibrahim, is a seasoned lead vocalist and international feature act with thousands of performances under her belt, including for Infamous (The Ashtons Circus), Circus Rio, Draculas (Melbourne and Gold Coast) Torture Garden (Japan),Café Concerto (London) Primo Loco, Risqué Revue (Slide), Side Show Series (HOTA) and composer who has worked under the pseudonyms Mesuline Wilde and Alysia Rose.

A love for composition led Christine to complete a Bachelor of Music in Contemporary vocals and begin to write original music and perform across Sydney.

Simultaneously Christine was working in the club and corporate scene as a singer and pianist, holding residencies at The Art House and The Ritz Carlton and entertaining clients including Samsung, BMW, Ray White and Renault.

Christine found aerial acrobatics later in her performance career during a residency at The Victoria Room while playing piano and singing with her trio. Within 6 months the former competitive rhythmic gymnast created her first singing aerial act.

In 2014 Christine went on to complete a professional aerial course with Aerial Angels, training for over 30 hours a week while simultaneously performing five nights a week with her singing lyra “Chandelier” act and singing excerpts from “Carmina Burana” during a two-point harness performance.

Christine has since been employed by Aerial Angels as a singing aerialist and aerialist for troupe acts across Australia and the Philippines.

Christine was commissioned by Peter Gray to write a piece for his installation in the international hair show “Shhh” held in Sydney at the York theatre to raise awareness for human trafficking in Australia.

As a recording artist Christine created a debut EP in 2015 called Wonderfully Terrible Things and has also featured on various Australian artists work as a backing vocalist.

Christine is a featured extra and in The Axis of Aweosme’s comedic parody song In The Club video clip with over 2million views on YouTube and her love for intertwining comedy into performance can be seen in her audacious antics and poignant witticisms that are crowd favourites in her solo and stage shows.

Christine was one of the first producers to start creating work for artists after the height of the lockdown in Sydney in 2020, reprising the show Wonderfully Terrible Things in a larger than life way with a cast of 12 at The Vanguard Newtown. The show sold out within a week and has sold out since and is continuing in Sydney with dates locked in for Melbourne and The Gold Coast later in the year.

A lover of language, with Edith Piaf being one of her key influencers early on, the corporate show Music Speaks celebrates songs in a variety of languages and is an eclectic mix of uncovered gems and nostalgia for the performer and audience.

Never content to rest on her laurels, Christine is currently in the creation process for two new acts combining her first love, classical singing with aerial acrobatics.

One version to an original composition called “Bullum Omnium” and one to Schubert’s Ave Maria with the original German Text based on the poem Lady of the Lake.

This polymath of a performer can back up every facet of her acts with a lifetime of practice and performance, leaving her unparalleled on (and above) the stage and audiences spellbound. 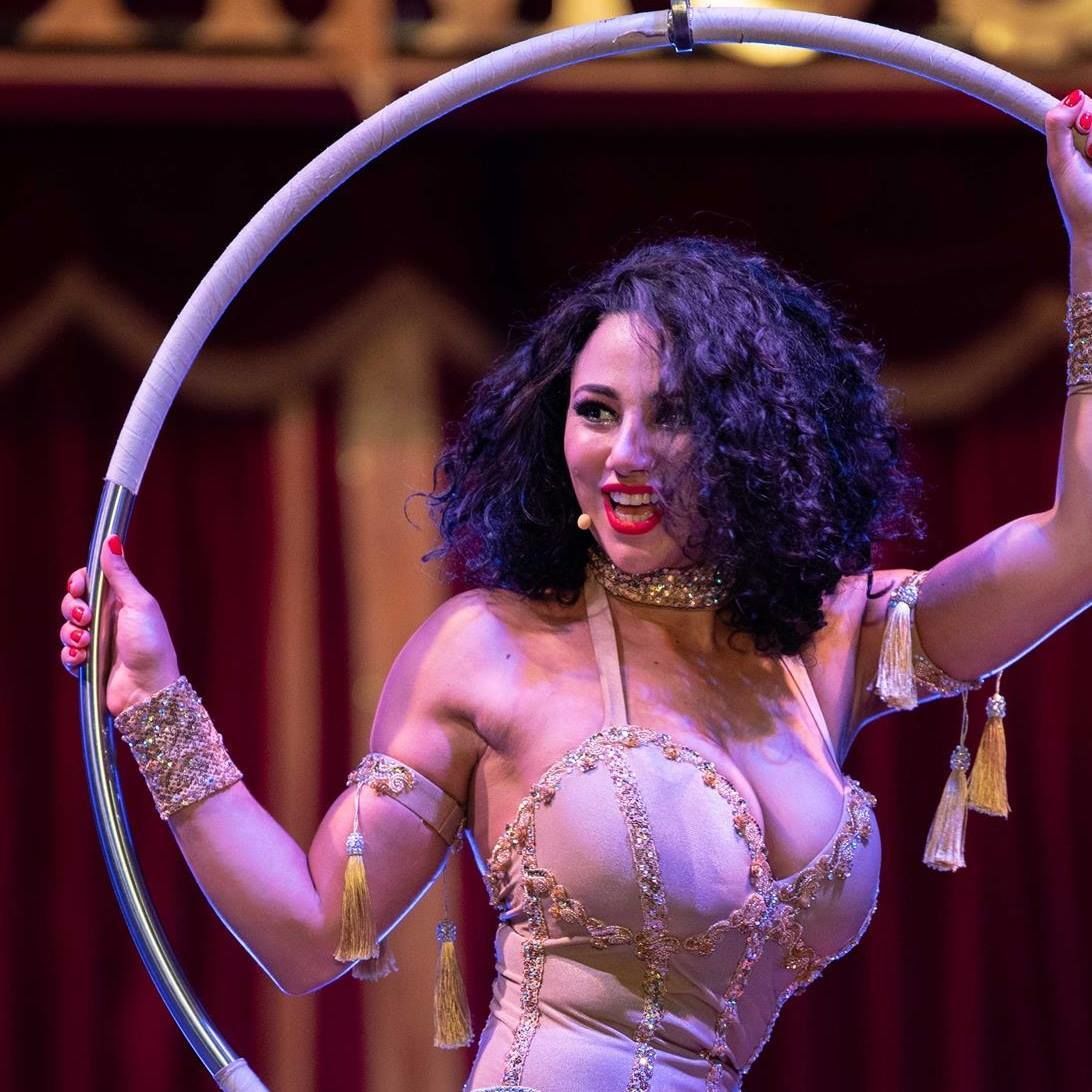