Hannah Trott is a Melbourne-based aerialist and dancer. Born in the UK, Hannah performed as a professional dancer in Europe and Asia before moving to Australia to train at the prestigious National Institute of Circus Arts. There, she completed a Bachelor of Circus Arts in 2013, specialising in Aerial Silks and Roue Cyr.

Aerial Silks consists of two lengths of fabric, suspended vertically, with which the aerialist can climb, contort and perform thrilling drops. Hannah offers a range of Aerial Silks acts for performance, whether you'd like elegance and beauty to entrance your guests, or a sparkly, high-energy act to make them smile.

Hannah has a wealth of performing experience, from large corporate events, to theatrical shows, cabarets and nightclubs. Since 2013, she has been the aerialist for 'The Paris Underground Cabaret', touring regional Australia, as well as performing at community and corporate events. She was part of the original cast of 'The Carnival of Lost Souls' (Australian Tour) for Platonic Music, for which she created two bespoke aerial acts.

Aerialist and dancer Hannah combines a dancer's grace with the thrill of aerial silks as she performs captivating contortion and breathtaking drops. 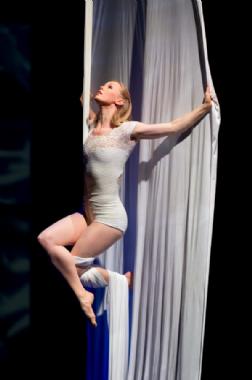