Kali uses her grace, skill and flexibility to create an aerial act that dances through the air, followed by an exciting spinning finale. Inspired by the elegance of the circus bygone era, this act can be adapted to a variety of themes and is perfect for spaces with limited height.

Kali is and an experienced physical performer based in Melbourne, specializing in Aerial Ring, Tissue, Hulla Hoops, Adagio and Dance. Kali became a member of the Flying Fruit Fly circus at 14, where her love of circus began.

Kali trained in dance at the Dance Factory in 2007 and has since been freelance circus performing around Australia and the world. Kali has most recently starred in the Helpmann award winning Smoke and Mirrors in The Famous Speigletent, touring Melbourne, Auckland, Sydney and Edinburgh. Kali is a member of new and upcoming circus company A4 circus ensemble, performing at the Melbourne and Adelaide Fringe, Sydney Hoopla, Montreal Circus Festival in 2010 most recently a regional tour of Victoria. Kali has just returned from South Korea, performing with Strange Fruit in the World Expo 2012. Kali’s passion to create circus that fuses movement and skills in a beautiful and honest way. 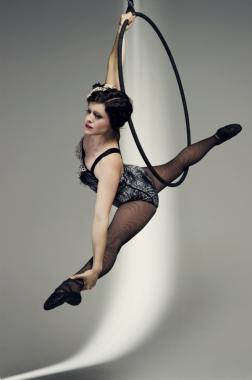